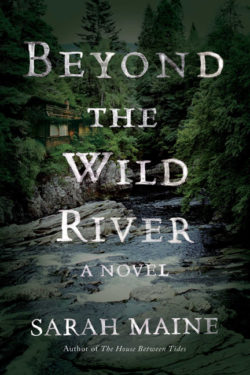 BEYOND THE WILD RIVER by Sarah Maine is a great historical adventure to North America during the 1893 World Fair, enhanced by the dangers on a Canadian Nipigon River fishing expedition.

Evelyn Ballantyre leads a boring life as a Scottish heiress under her father’s strict guidance. When he discovers her friendship with his groom, he ensures she’ll never see him again. Determined to win back his daughter’s affection, Charles Ballantyre takes her with him to the 1893 World Fair in Chicago, followed by a fishing expedition up the Canadian Nipigon River.

James Douglas, Ballantyre’s former groom, has a new life in America, but no one expects they’ll ever be reunited, including James. Will that one horrific night they experienced in the Scottish Borders play out once again in the Canadian wilderness?

This book moves very slowly through several storylines, gradually building anticipation of a showdown you’re sure will come. The fun part is that I didn’t expect the twists and conclusion.

The novel focused on rich financiers who seem to rule everything they touch, including people. It’s a life full of opulence in America, even though the rich fear losing it all. Evelyn is in the middle of it and not thrilled with her father’s constant business transactions that pull him away from her. Stuck with his friend and business partner, Larson, Evelyn is left to wonder if she’ll ever truly know her father.

What I enjoyed most was the Nipigon River wilderness part of their expedition. A fascinating adventure that only the rich experienced, their journey pops off the pages with engaging characters and anticipation of danger.

Even though I wasn’t as enamored with this book as much as with THE HOUSE BETWEEN TIDES, it’s a good suspense that covers a time and place in history I don’t see often in historicals. Sarah Maine writes absorbing historical detail. Her ability to cast suspicion and spin a web of deceit makes me anticipate whatever she writes next.