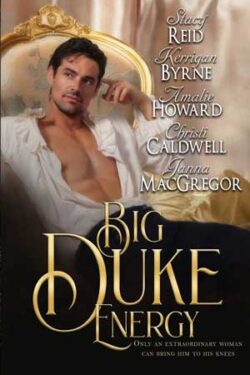 BIG DUKE ENERGY is a collection of historical romance short stories that feature secondary characters receiving their happily-ever-afters. Unfortunately, I am only familiar with three of the five authors presented in this anthology. And two of those authors, I have only read one of their series. So, I had hoped this anthology would broaden my horizons to new books to explore.

THE EARL ON THE TRAIN by Kerrigan Byrne

The man practically oozes sex appeal and danger. What I adore the most about Sebastian is his rage against Veronica’s late husband. He wants nothing more than to erase the monster’s abusive ways from her mind permanently. Veronica is a remarkable woman. She has survived an abusive relationship. Instead of hiding away, Veronica tries to help other women in a similar position. I admire that about her!

THE EARL ON THE TRAIN is book eight in Kerrigan Byrne’s historical romance series, VICTORIAN REBELS. I have been wanting, and waiting, for this couple’s story since, THE DUKE WITH THE DRAGON TATTOO, book six in the series. I highly suggest reading that story before delving into this one.

This novella alone, I would gladly give five stars! Kerrigan Byrne always blows me away with her stories. She is the main reason I picked up this anthology.

LOVED AND FOUND by Christi Caldwell

Former Lieutenant Thaddeus Phippen is the son of a bricklayer. Free from the war, he now works for his older brother. Lady Edith “Edie” Peregrine is the daughter of a duke and a widowed Marchioness. She has survived a cold and loveless marriage. Neither one has forgotten about their forbidden love when they were younger. A snowstorm forces Edie and Thaddeus to reconnect. However, the past continues to loom over them. Will Thaddeus and Edie reconcile their differences? Or will their shared past keep them separated forever?

It took me a while to warm up to Thaddeus. I understand why he felt so disillusioned and bitter towards Edie. However, I feel that Thaddeus should have anticipated some trouble from her parents because of their social differences. What I like the most about Thaddeus is despite his feelings towards Edie, he refused to leave her injured and susceptible to the elements.

I could not help but like Edie! Even at a young and impressionable age, she did not care about class distinction. Edie befriended a commoner despite her parents’ approval. What I admire the most about Edie is the sacrifice she made for Thaddeus’ family. She gave up her own happiness to make certain his family prospered.

I am only familiar with Christi Caldwell’s ALL THE DUKE’S SINS series.  After some sleuthing, I discovered LOVED AND FOUND goes with HIS DUCHESS FOR A DAY, book four in the author’s HEART OF SCANDAL series. I could not shake this suspicion that Edie’s brother, Crispin, had a story.

THE WOLF OF WESTMORE by Amalie Howard

Wulfric Bane, the Duke of Westmore, co-owns a pleasure club that is open to all who will abide by their rules. His peers know him as the Wolf of Westmore. Lady Jocelyn Capehart is the youngest daughter of a cruel and heartless duke. She wants to experience one pleasurable night on her terms before being forced into a marriage to an old lecher. The Banes and the Capeharts have been age-long rivals. Can Jocelyn find a way to escape her dour future? Will Wulfric choose revenge over a future with Jocelyn?

I admire Jocelyn’s fortitude. She knew what her father had planned for her, so she risked severe reprimand by sneaking out for a small taste of adventure. I like Wulfric’s sense of honor. He may want revenge on the Capehart family, especially the patriarch; however, he refused to ruin an innocent girl to achieve it. What I like the most about Jocelyn and Wulfric is their common ground. They may have been born natural enemies, but they were both close to one particular person.

THE WOLF OF WESTMORE is book 2.5 in Amalie Howard’s EVERLEIGH SISTER series. I am new to this author’s works. However, I want to check out the previous two books in this series. Roth and Beswick entertained me. Plus, I would like to learn about the women that tamed them!

PUT UP YOUR DUKES by Janna MacGregor

Martin “Duke” Richmond is the editor and owner of a popular gossip pamphlet. He is not above embellishing a story to sell more papers. Amelia Richmond spends most of her time volunteering at a foundling house. She cannot abide the trash that her husband publishes. Martin and Amelia have been estranged for five years; however, the two meet every Wednesday for coital relations. Will Martin let The Midnight Cryer destroy his marriage? Can Amelia convince her husband to choose her over his job?

Martin annoyed me. I understand his resentment towards the nobility; however, he took his vengeance too far for my tastes. He did not seem to care that he alienated Amelia from her friends because of his paper. Amelia is a saint! She handled the trouble her husband generated with aplomb. What I adore the most about Amelia is her dedication to the foundling house. When people came to buy her help, she nudged them to donate there instead.

PUT UP YOUR DUKES is a part of Janna MacGregor’s historical romance series, CAVENSHAM HEIRESSES. The hero from book four, THE GOOD, THE BAD, AND THE DUKE, makes appearances in this story. Sadly, I am only familiar with Janna MacGregor’s WIDOW RULES series.

DUKE OF EVERY SIN by Stacy Reid

Ethan Benedict, the Duke of Bainbridge, has been riddled by guilt and regret over his friend’s death. He discovers an abandoned baby on his doorstep. Lady Verity Stanton is the disgraced daughter of an earl. She tries to steal her nephew from the Devil Duke, only to be caught. Ethan sees the baby and Verity as his chance for atonement. Verity agrees to marry the duke to stay in her nephew’s life. Can Verity help Ethan forgive himself for his part in his friend’s death? Or will his secrets destroy their marriage?

My heart went out to Ethan. He is a man consumed by grief, guilt, and remorse. What I adore the most about Ethan is how he helped Verity get retribution. He made sure all the shallow people who shunned her saw her rise in status. Verity is such an inspirational woman. I love how she did not abandon her sister. Instead, Verity willingly followed her into disgrace. She also refused to give up on her nephew.

I am new to Stacy Reid’s works, so I do not know what series/book DUKE OF EVERY SIN belongs to/connects with. The story could easily stand alone. The other novellas I could easily determine where they belonged, after some careful looking around.

BIG DUKE ENERGY is book one in the SEASONS OF SIN anthology collection. Each story can easily stand alone. I love how anthologies allow me to try out new authors. BIG DUKE ENERGY is no exception. I really enjoyed Amalie Howard and Stacy Reid’s writing style.