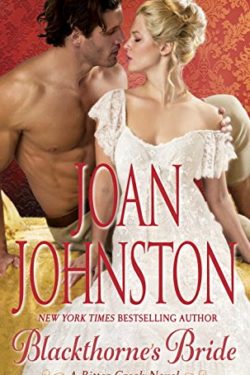 BLACKTHORNE’S BRIDE by Joan Johnston, book four in her MAIL-ORDER BRIDE series, is Josie Wentworth’s story. It takes place after she was abducted by a renegade Sioux when her family’s wagon was attacked in America. Josie fought back, which enraged her attacker, subsequently resulting in her capture and punishment. Her sisters search for their youngest sister for two years before they know what happened to her during that time.

Marcus Wharton, the Duke of Blackthorne, witnesses Josie’s brutal punishment by the renegade who inflicted her pain and almost caused her death. Blackthorne bargained for Josie’s release, then tirelessly cared for her during the journey by ship back to England. His traveling companion and best friend, David Madison, the Earl of Seaton, questions Blackthorne’s sanity. Especially since Marcus is due to marry the earl’s sister, Fanny. But Blackthorne is determined to help Josie heal then send her back to her family in America when he finds out who they are.

Two years later, and after his wife Fanny’s death, Blackthorne advertises for a wealthy American bride to help him save his family’s heritage in exchange for a title. Josie learns of her inheritance at the same time and happens upon the advertisement. In previous books we learn that Josie’s brothers and sisters were orphaned during the Chicago fires. Their time in an orphanage led a couple of the girls to become mail-order brides to escape, bringing some siblings with them, which leaves Josie as the last sibling whose fate is unknown until now.

Josie blames Blackthorne for what she endured over the past two years. The only thing that’s important to her are the duke’s two nephews, who had languished in the same castle where she was forced to work as a maid. Can Josie trick Blackthorne into marrying her without relinquishing who she really is? Her plan is to escape to America with his nephews before he finds out.

I have thoroughly enjoyed this series, and even though this final book isn’t my favorite, it kept me riveted for most of the story. Fans of the series have anticipated Josie’s story probably more than the other sisters’. That’s because she was the one abducted and we didn’t know if she was alive. It wasn’t until her sister hired a Pinkerton agent who located Josie and made her aware of their mutual inheritance.

Let me forewarn you that what Josie endures is brutal. It’s described in the prologue, so if violence offends you, this is the only place it’s vividly defined. I know that sometimes violence toward pioneers portrayed in Western historical romance is a big bugaboo with some readers. In this case, it was a renegade group of Sioux, which doesn’t excuse the stereotypical “white woman is abducted by an Indian,” but it explains the violence as if it were a group of outlaws.

For a large portion of the story, the reader is fully aware of where Josie has been since her brutal attack, but the duke is left in the dark. He doesn’t come off as a very caring individual by his deeds, other than that he personally attended to Josie’s wounds and was prepared to send her home to family when she was well. When Blackthorne meets her again, he’s unaware of who she really is but is instantly attracted to her. A marriage of convenience quickly becomes one of love for the duke, even before he realizes Josie is the woman who haunted his thoughts for two years.

This plot is complicated and oftentimes outrageous, but even that didn’t stop me from reading. I have a fascination with Joan Johnston’s books, even when I’m shaking my head at myself for gobbling these up. Josie’s inner thoughts were too repetitive, and I really didn’t like Marcus at all. Oh sure, he was compassionate and saved Josie, but he was sort of an idiot during the next two years. I didn’t find him romantic in the way he handled his virgin bride. He was brutish and determined to consummate. Their lovemaking never felt right, even though Josie didn’t complain.

But, little by little, the man starts to show who he really is, and Josie begins to fall in love with him. She’s not happy about that any more than I was, so we were on the same page there. Still, even with all these mixed emotions I felt while reading, I rushed to the end. I enjoyed the journey overall and was happy with the conclusion, so I don’t mind a few quibbles.

I highly recommend that you read the first three books before BLACKTHORNE’S BRIDE. It can be read as a standalone, but TEXAS BRIDE, WYOMING BRIDE and MONTANA BRIDE successfully lead up to this conclusion. It’s an engaging series that is better read as a whole because of the interwoven storyline of a family separated by tragedy.

Although BLACKTHORNE’S BRIDE doesn’t contain the wackadoodle hilarity from some of the characters and situations I’ve grown to expect from the series, it’s still absorbing in a darker way until its satisfying happy-ever-after. It’s good to finally have the answers to questions I’ve had since the beginning of the series. If you need a break from reality, then this family’s story will charm you. Once you read the MAIL-ORDER BRIDE series by Joan Johnston, you’ll have a variety of other related books to consume, both contemporary and historical, starring the Blackthornes and the Creeds.