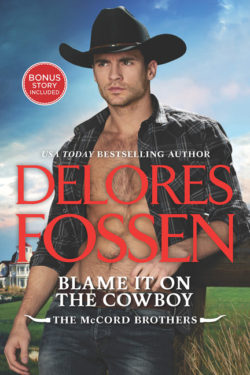 In Denise Fossen’s BLAME IT ON THE COWBOY, Logan McCord is on a mission. After eight years of dating Helene, he is ready to pop the question. He enlists his family to help him by surprising her at work, only to see her having intimate relations with a clown, literally. He walks out, heads to a bar, and proceeds to drown his sorrows.

Reese Stephens has had a hard life. Her parents were con artists and abandoned her when she was young. Her beloved grandfather took care of her until his death when she was sixteen. She has been on her own since then. She put herself through culinary school and is working as a chef in a local restaurant. She can’t seem to stay in one location more than six months without her mother (her father is deceased) finding her and demanding money. She now faces victims of her parents’ scams coming after her to pay off their debts.

Reese went to the doctor for treatment of what she thought was a sinus issue only to hear she has an inoperable brain tumor and only weeks to live. She makes a bucket list of goals to accomplish before her death. She quit her job (her boss was a jerk), she gave away her possessions to friends and charities, and looks for a hot cowboy to have sex with (a girl does have her needs).

Reese meets a very sexy, drunk cowboy in a bar. He is gorgeous but more than a little sad inside. Since she is also more than a little sad, she offers him a night of passion with no strings attached. Although she is not normally his type, Logan leaves the bar and spends an unexpected wild night with her.

The next morning when he awakens, she is gone. However, she left an old gold pocket watch. Concerned he is being set up to look like he was robbing her, he tries to find out who she really is but the name and address she left were bogus. Logan is CEO of the multi-million dollar company McCord Cattle Brokers. He lives a very responsible life. He is concerned this incident could lead to him being blackmailed.

Because she believed she was dying, Reese gave her most precious possession, her grandfather’s gold pocket watch, to Logan after an incredible night of passion. When she learns the medical lab mixed her test results with someone else and she is not dying, all she can think about is getting the watch back. She tracks Logan down hoping to somehow retrieve the watch. When Logan sees her working as a cook at the local diner, he immediately knows she is up to no good and can’t be trusted. Although she tries to explain why she is there and that she plans on moving on immediately once she gets her watch back, he doesn’t believe her and the adventure really begins.

This book is filled with twists and turns and such funny characters. I found myself chuckling a lot and reading it straight through. Can Reese help Logan mend his broken heart and learn to trust again? Can Logan protect Reese from her crazy mother who isn’t above setting up and blackmailing everyone she can? And while all this is happening, his ex-girlfriend has decided she wants him back and will do whatever she can to get rid of Reese. Will it ever end?

Delores Fossen is a wonderful writer whose characters are fun and well developed. Reese and Logan are two people whose paths accidentally cross but who are actually, I believe, fated to meet. You can’t help but cheer them on.