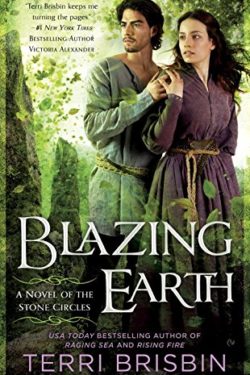 Tolan of Durrington understands the prudence of keeping his earth magic secret. Elethea of Amesbury follows in her mother’s footsteps by becoming the village’s healer and midwife. Will Tolan and Elethea’s magic be enough to keep the evil goddess Chaela from the world? Or will they unwittingly release evil to humankind?

Tolan of Durrington is the earthblood, a human descendant of the god Cernunnos, with the power over plants and the earth. He is the overseer of Lord Geoffrey’s farmlands. Tolan secretly uses magic to rejuvenate and revitalize the land for planting. He grows worried when Lord Geoffrey’s interest focuses on finding a particular set of standing stones. Tolan also discovers the village healer, the very woman he had been spending time with, is like him. Desperate for answers, he retreats to his farm with Elethea and seeks out the secret hidden there. Danger and unexpected allies arrive in Amesbury. The evil fireblood forces Tolan’s hand. To save his son’s life, he and Elethea must release the evil goddess Chaela from her prison.

Elethea of Amesbury is the sunblood, a human descendant of the god Belenus, with the power of the sun and healing. She is the village’s healer and midwife. Elethea vows to never marry again nor allow another man complete control over her person. She fears telling Tolan of her shameful inability to bear children. After an enigmatic symbol mysteriously appears on her arm, Elethea discovers a new ability to heal with magic. She decides to entrust her lover Tolan with her secret ability, only to learn he too is blessed with magic. Allies convince Elethea and Tolan on why they must thwart the evil fireblood’s plans on releasing Chaela. Unable to help rescue Tolan’s son from the fireblood’s grasp, she swears to share the sin of freeing Chaela into the world.

Tolan had his good points and his bad points. I like that despite knowing the extent of his bloodline and his abilities, he always behaved down-to-earth and humble. Tolan may be strong in his earth magic but he too is prone to the typical human failings. I love Tolan’s willingness to marry Elethea, regardless of her incapability of bearing him more children. I like how he never allows her fears and insecurities to remain; instead, Tolan soothed her doubts and worries in a calm, loving manner. What I admire the most about Tolan is the difficult choice he faced, even knowing his actions went against what felt right.

I love the uniqueness of Elethea’s name. There were moments when her timidity got on my nerves, yet as the story progressed, Elethea started to lose most of her docility. I like how Tolan’s love and open acceptance gave her the confidence to find her inner strength. Tolan’s acceptance of her body’s shortcomings also helps Elethea to come to terms with her defects and move forward to find happiness. Healing people and helping others, I believe, gave Elethea the will and temerity to go on after her late husband’s jealousy controlled her. I like that Elethea is clueless and unaware of her connection to the god Belenus and her bloodline. Learning her bloodline, and adapting to her new ability, aided Elethea in discovering her newfound confidence.

BLAZING EARTH is the third book in Terri Brisbin’s THE STONE CIRCLES series. I have not read the previous two books in the series, but I was able to follow the story and plot without any hang-ups. My only complaint with the book is that the hero and heroine were already a couple. I felt cheated out of witnessing the budding relationship between Tolan and Elethea.

BLAZING EARTH is a spellbinding blend of fantasy and historical. I love the fact that the author included some ancient Celtic gods I am familiar with. The druidic feel of the magic in Terri Brisbin’s mystical world riveted me, and I cannot wait to find the other books in this series.