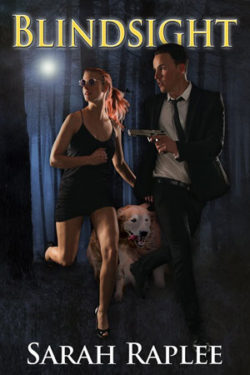 BLINDSIGHT is the author’s debut novel and the first book in her PSYCHIC AGENTS SERIES.  I look forward to reading more books in this series which is in the genre of romantic suspense something I don’t read enough of.

There are family and friends, animals, the forest, caves, fights, weapons, secrets kept and others revealed, as well as fear, anger, hurt, tears, mysteries solved, laughter, happiness, revelations, loving and love. There is the hope for the survival of the good guys and what they’re after and the demise of the bad guys.  There is one surprise after another along with heart stopping moments. There is some closure and a happily ever after or two in the offing. There are enough loose ends and hints to lead us into another book in the series and I look forward to reading it.