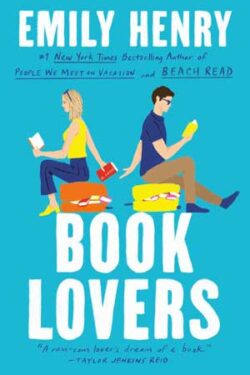 BOOK LOVERS is the third book I’ve read by Ms. Henry, and I look forward to reading more of her books. She drew me in from the very first page! I couldn’t stop reading, even with all the angst that big sister Nora is going through to live her life on her terms.

When Nora’s sister, Libby, suggests they go away for a month—the first three weeks of them alone—she doesn’t know what to think. Her life and her job consume her, and that’s all in New York City, not a small town in North Carolina. It doesn’t help that Libby is very pregnant, has two young daughters and a husband, and has a bucket-list of things she wants to do with Nora while they’re on vacation. Since Nora always puts Libby first, guess they’re going on vacation!

The story has a nice flow but leaves a lot unsettled in Libby’s life that Nora can’t figure out.  Nora doesn’t like the secrets between them and finds them hurtful. Libby and her husband don’t seem to be talking much while they’re apart, and Nora and he have had stilted conversations as well. Throw in small-town gossips, quirky businesses, a demanding job even when on vacation, and a few other surprises and Nora is feeling unsettled. It doesn’t help that she crosses paths with Charlie, an editor she tried to work with two years before, ending in a meeting that didn’t go well. Now she learns he’s from that small town and will be there as long as she. Things get interesting fast.

There are a few steamy moments between Nora and Charlie. They butt heads initially but seem to come to understand each other. Their lives are made up of books. He’s an editor, which is her dream job, and she’s a literary agent. When they need to work on a book together while Nora’s on vacation, will things pan out or will history repeat itself? There are some emotional moments between Charlie and Nora as well as between Nora and Libby.  Things don’t work out the way Nora expects them to, and does that shake up her life!

The story has emotional scenes and good pacing. There’s closure though there seemed to be more story to tell. I like the epilogue that takes place six months later but wish it went on a little longer. The Reader’s Guide, including the discussion questions, and Nora and Libby’s Ultimate Reading List are a nice addition. And the brightness and whimsy of the cover really add to the enjoyment of the story.