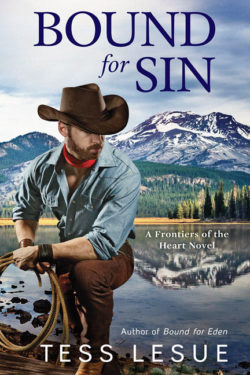 BOUND FOR SIN by Tess LeSue is easy to recommend for its well-rounded entertainment. You’ll laugh, cry, and be enchanted by the western historical detail that makes you stick to this book like glue. I really can’t get enough of the FRONTIERS OF THE HEART series. I’m completely addicted, especially to read more about Deathrider, my favorite character.

Georgiana Bee Blunt advertises for a husband and starts a ruckus in Independence, Missouri. Men come from near and far to get their hands on her gold, even though she’s beautiful enough to be desired for that alone. Her rambunctious children may be a problem, though.

Instead of the fancy gents who coming calling, Georgiana has her eye on a brute of a man, Matt Slater. He’s surly, big, and a hairy beast after being on the trail so long. But Matt wants nothing to do with this woman and her unruly children. He just wants a bath, a bed, and a good meal. Heck, he’ll take the bed without the bath or a meal if you get right down to it.

If these men only knew that Georgiana’s oldest son is being held for ransom in exchange for her husband’s gold mine. Leave it to that no-good, notorious husband to up and die on her 2000 miles away, leaving her twelve-year-old son to fend for himself. Georgiana had no choice but to pack up her twin boys, her daughter, and her two-year-old son to go west and rescue the oldest. She lands in Missouri hoping to find a husband to get her westward.

There are so many wonderful parts to this novel. It truly has something for every type of historical western fan. From the hilarious repartee from Deathrider, my favorite character in this series, to the rich historical detail of traveling by wagon train, I can’t really say what makes this book so awesome other than it has everything I love in a story. I laughed so hard in certain moments. I cried my eyes out in others. I raced ahead to see how their issues would be resolved. So much to love.

I enjoyed the detail about the wagon train preparations. It made this historical time frame come alive. America’s early pioneers are fascinating, and the enormity of what they’re undertaking is evident in these characters’ thoughts. It makes me appreciate the brave men and women with an adventurous spirit that forged ahead into the unknown.

I was thrilled to have Deathrider take such a huge roll in this novel. He slayed me in book one, so I couldn’t wait to see what he would do in this novel. His sparring with Matt is just as hilarious as in the first book with Matt’s brother. But he’s even more cranky when he’s ill, which makes him more lethal and funnier at the same time. Even though Deathrider isn’t the hero in this book, I think he might be my favorite Native American character of all time. His dry sense of humor mixed with his sense of honor is a fascinating combination. He pushes Matt’s buttons more than he pushed his brother’s in book one.

There is also a very emotional proponent to this novel that turns everything you thought you knew upside down. Wow, did that one get to me. I wasn’t sure how Georgiana and Matt would get past their obstacles. There are some nasty villains in this one that put them through their paces.

I loved Georgiana and Matt together. They win the least likely couple award, which makes their story a very addictive roller coaster. Matt is every woman’s dream of a strong, resourceful man who can survive anything thrown at him on the trail westward. But that doesn’t mean he lives without feeling things deeply. Georgiana really tested him.

I enjoyed BOUND FOR EDEN, the first book in the FRONTIERS OF THE HEART series. I couldn’t imagine a better book, but BOUND FOR SIN is exactly the type of pioneer story I love to read.

Excellent story! Even though I guessed what would happen in one suspenseful moment, there were so many other surprises that I didn’t guess. I miss the characters and wish the book could go on and on. Highly recommend.