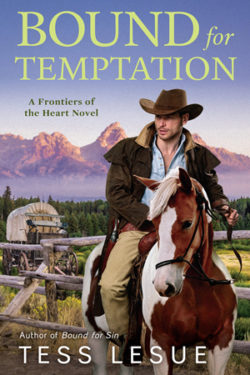 BOUND FOR TEMPTATION by Tess LeSue riles up the west as the naughty heroine disguises herself as a nun, launching one crazy plan after another.

Seline dreams of a house in San Francisco – a dream that comes closer to reality when she sells her three whorehouse saloons and becomes Emma Jane Palmer. It would be immediate gratification if it wasn’t for the pesky outlaw who insists on marrying her. That’s when her grandest plan takes root, disguised as a nun to travel safely out of that man’s reach.

Thanks to Deathrider, Tom Slater is on the run from bounty hunters. The darn fool used Tom’s fairly good name when the heat became too much around Deathrider’s reputation. A reputation earned mostly by a dime novelist who found the crazy Indian perfect fodder for her creative adventures. Now the “real” Tom Slater can’t go anywhere without having his life threatened. It’s no wonder Tom prefers cows over people.

The beginning of BOUND FOR TEMPTATION is a riot when Deathrider verbally spars with Tom, but then the book gets repetitive with Seline’s thoughts from a nun’s point of view. She spent her life as a whore and a madam. A nun’s thought process doesn’t equate with the reader’s interpretation of her character.

Tom is a little too pure for a man. It made his reaction to his situation funny, but I couldn’t relate to him the way I did with his brothers in BOUND FOR EDEN AND BOUND FOR SIN. Seline spends too much time in her head arguing with herself, creating a lack in dialogue between them, which would have made the book more interesting. BOUND FOR TEMPTATION had potential, but by stalling midway I wasn’t anxious for it to continue.

That said – I know this author’s talent for storytelling, having loved the first two books in the FRONTIERS OF THE HEART series. I kept reading because I liked Seline, aka Emma, as she preferred to be called, and wanted her happiness. By the last quarter of the book, after I knew Emma’s past, I was invested in her future. Everyone deserves forgiveness, Emma and Tom included. The end of this creative novel is beautiful and perfect, which made me crave the next story even more.

BOUND FOR TEMPTATION is full of crazy, hair-brained ideas. That’s Seline, who always has a plan. The comedic tone makes this author’s brand of western irresistible. There is a lot of raucous talk and pure sex in this one. What do you expect when the heroine is a whore pretending to be a nun? It must be outrageous, and it is. But the kindness, redemption, and love make up for Seline’s naughty self in the end. She cleans up real nice. A class act with a huge heart.

Fans of pure western adventure romance will love the FRONTIERS OF THE HEART series. It’s rowdy, unexpected, and full of fun characters whose journeys to happy-ever-after are pure addiction.