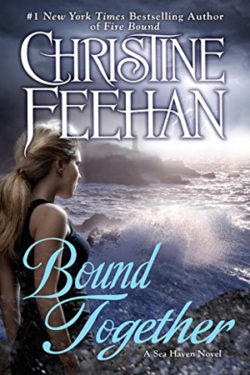 BOUND TOGETHER by Christine Feehan is book 6 in the Sea Haven-Sisters of the Heart Series, and it does not disappoint.

Five years ago, Blythe Daniels fell in love and married an amazing man, or so she thought. Victor Prakenskii had a job to do. Bringing Blythe’s father, who was involved in some of the most atrocious crimes against children, to justice did not go as planned. He ended up killing him. He did not, however, expect this action to happen in front of Blythe. He also did not expect he would be unable to immediately explain to Blythe why he did what he had to do. After killing her father, his job still wasn’t done. He had to find and stop the rest of the human trafficking ring her father was involved with. He did leave her a letter explaining who he really was and what he had to do and that he would be back for her. A letter, really? Men!

Blythe and the women she calls her sisters of the heart live on a farm in Sea Haven. Although not related, they are sisters because they have helped each other overcome their horrendous childhoods. They also have special paranormal abilities.

Although close to her sisters, Blythe has a secret. She never told them she has been married for five years. However or why it has happened, fate has decreed that all her sisters have met and married a Prakenskii brother. The Prakenskiis are dangerous men known for doing whatever is required to stop evil. Blythe understands her father was an evil, dangerous man and deserved his fate. But Victor disappeared from her life with no explanation. She thinks he is no longer alive until the day he shows up in her home town as the leader of a motorcycle club whose members are more than a little bit scary.

Victor has come to Sea Haven to set up a trap that he hopes will result in the leader of the human trafficking ring being caught and brought to justice. He also wants his life and his wife back and will do whatever is necessary to earn her trust and make her realize she is his world, and that he will do anything to keep her safe.

It will take not only Blythe, but her sisters and cousins and all the Prakenskii brothers to come together to protect the town and rid the world of this evil.

I love this series. Each book can be read as a stand alone, but I found reading them all really brought insight into each of the characters, and with them all coming together in this final book and fighting evil using their special gifts, it felt really, really good.

Christine Feehan is an amazing author who can make the unbelievable feel like an every day occurrence. Her readers will love BOUND TOGETHER.