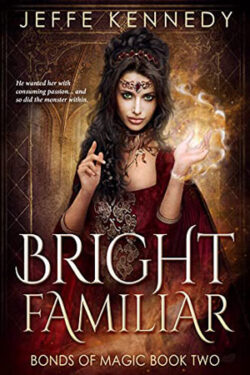 Lord Gabriel Phel is a wizard proficient in moon and water magic. He plans to keep his hard-won familiar from the Convocation. However, Gabriel discovers something unsettling about his nature. The two work tirelessly to find their wizard and familiar dynamic. Can Gabriel keep Veronica safe from the Convocation? Will he have to turn into a monster to defeat them?

Lady Veronica “Nic” Elal-Phel has surrendered to the inevitable. She puts all her efforts into re-establishing Gabriel’s house to its formal glory. Nic tries to guide him into understanding and accepting his wizardry nature. However, the Convocation threatens to destroy their hard work. Can Nic convince Gabriel to be the wizard he is meant to be? Or will her efforts be in vain?

Gabriel continues to amaze me. He is a man who is not afraid to be different. I admire how Gabriel balks at becoming like the other Convocation wizards. He refuses to go against his integrity. Gabriel hates the flaws in their society’s mentality that other wizards exploit for their own gain. What I love the most is how Gabriel and Nic’s bonding is not the normal wizard/familiar kind. Its uncharted waters requires them to learn as they go.

Nic has made the most progress. She is the perfect balance for Gabriel. Nic believes in his magical ability when he doubts it. I adore how Nic does not take advantage of Gabriel’s ignorance. She knows that he did not receive the same education she did, so she fills in the gaps in his wizardry education. What I love the most about Nic is how she warms up to Gabriel’s ideology, especially his stance on familiars. She is aware that the Convocation will find it profane; however, that does not stop Nic from influencing the wizards that flock to House Phel to share his ideals.

BRIGHT FAMILIAR is a spellbinding tale of two people’s fight to overcome an antiquated society. I cannot wait to see how Gabriel and Nic will tackle the new challenges that await them!