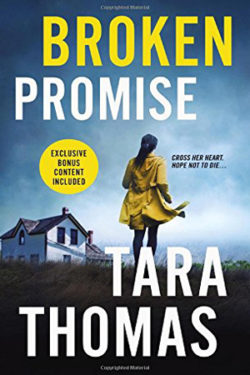 BROKEN PROMISE by Tara Thomas is the third book in the Sons of Broad series, and it is just as exciting and as the first two books.

Charleston Police Officer Alyssa Adams is on a mission. Her sister disappeared ten years ago. Since that time she has devoted her life to finding missing women. Her goal is to take down predators and help women stay safe and, hopefully, answer questions she has regarding her own sister’s disappearance.

Kipling Benedict runs the Benedict empire and is the oldest son. His family means everything to him, and he just recently learned he has a sister neither he nor his brothers knew anything about. He is determined to find her.

Someone is trying to destroy the Benedict family. Kipling has teamed up with Alyssa to try and figure out who their adversary is. She’s also helping him find his sister. Their journey puts them into dangerous situations against a madman who will stop at nothing to destroy those he considers his enemies.

Although this is the third story in the series, it can be read as a stand-alone book. But I highly recommend reading DARKEST NIGHT and DEADLY SECRET, because you get to know all the Benedict brothers and what they have endured in their lives, which gives you background for this story.

Tara Thomas did a great job with this series!