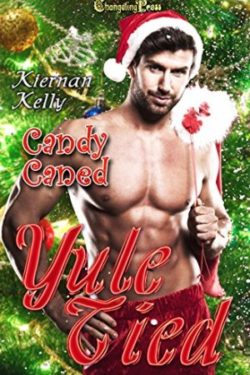 Daniel’s life at the North Pole is extremely busy – and sometimes overwhelmingly so. He genuinely enjoys his work as a train painter but there’s always so much to do and Santa can be a bit of a slave driver at times.  When Santa orders him to organize the annual Workshop Holiday Party Daniel begins to feel overwhelmed – and starts to evaluate his options, but there isn’t much in the way of employment for elves.

Fortunately for Daniel, his friend and lover, Stephen recognizes the signs of Daniel’s impending panic attack and soothes Daniel with a little one-on-one session in Stephan’s playroom where much to Daniel’s delight, Stephan introduces him to his newest toy – a bright candy cane that will be used to stripe Daniel’s nether regions and refocus his attention. Luckily, Stephen’s interference works and Daniel’s able to delegate and focus on throwing a party to end all parties, but will Santa approve of the sexy shenanigans?

I do believe Kiernan Kelly’s CANDY CANED is my favorite read of the YULE TIED novellas so far. Daniel’s musings about working elsewhere (and his thoughts on the Easter Bunny in particular) had me chuckling out loud – and I loved that Santa is portrayed as a sanctimonious boss.  Somehow that just makes the story so much more fun to read.  Daniel and Stephen’s relationship is sweet and spicy and it’s obvious they genuinely care a great deal for each other which is so very important in a D/s relationship.  Of course it’s their amorous activities in the playroom that give Daniel ideas for the party which give the story an ‘OMG, he didn’t really do that, did he?’ factor.  Kiernan Kelly manages to tell an awesome tale full of passion, laughter and friendship in 36 pages – that’s pretty impressive.

The Changeling Press Christmas/Holiday line has become something I look forward to each year. There are always surprising treats in the stories – in past years I’ve found myself chuckling at some of the unexpected storylines and this year certainly hasn’t been any different.