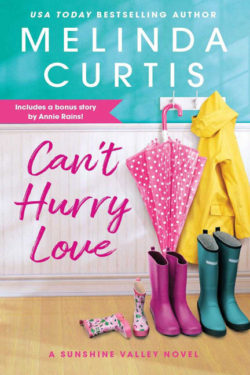 CAN’T HURRY LOVE is the first book in the SUNSHINE VALLEY series, and I can’t wait to read more. (Note, this book contains the novella, KISS ME IN SWEETWATER SPRINGS by Annie Rains.) There are so many characters and so many stories to tell! This is Lola and Drew’s story, but it’s so much more as we get introduced to the town, Drew’s family, the businesses, the characters, and most of all their secrets.

Drew is the sheriff and single parent to his young daughter, who adds a lightness to the story. Lola transplanted from New York City where she did makeup to the stars on Broadway. She fell in love with Randy and went to live in his hometown. Since his death a year ago, she’s trying to come to grips with all she’s lost…until she finds out that Randy seemed to lead another life. Lola does her own snooping to try and solve the mystery of her husband, but Drew tries to curtail her actions, and there’s an attraction between them that just won’t quit. He’s trying to find a wife for his daughter’s sake, and his sights aren’t on Lola.

There are a lot of layers to this story. We get immersed in small town life with its clubs, secrets, and gossip. I love how Lola had to reinvent herself when she came to Sunshine, since she works at both the senior citizens home and the mortuary. Lola rises above every putdown she gets, and in the process she learns a lot about her fellow citizens—not all good. Her efforts pay off, and she becomes a part of the community. There is some closure but the story ended too abruptly for me.

The novella, KISS ME IN SWEETWATER SPRINGS, book 2.5 in the SWEETWATER SPRINGS series by Annie Rains, is a very enjoyable read. I love the characters of Lacey and Paris and how they connect well despite being opposites. The author does a terrific job showing us their characters through their pasts and how they respond to each other in a loving way.

The story has closure, but I’d love to know what happens to them next and hope they will appear in another book in the series. The only other book I’ve read in this series was also a novella, A WEDDING ON LAVENDER HILL. A wonderful series!