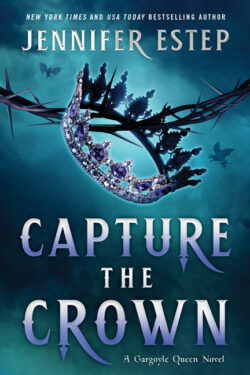 Jennifer Estep returns to her Crown of Shards world with a new trilogy. It’s not necessary to read the Crown of Shards trilogy to understand CAPTURE THE CROWN, though it does help for a better understanding of some of the characters. Still, this was a fun, adventurous tale about a princess who is much more than she seems.

Princess Gemma Ripley of Andvari has worked hard to be seen as no more than a pampered princess interested in shopping, gossip, and frivolity. But she’s actually a mind magier and spy. She’s spent years gathering information to help her kingdom, trying to make up for a perceived failure in her youth.

Gemma is working undercover, trying to determine who’s been stealing tearstone from the Andvari mines. In the process, she runs into Prince Leonidas Morricone of Morta–the man who, as a boy, turned her over to his evil family. The Andvari and Morta kingdoms have been enemies for some time. But Gemma and Leo have a connection, even if he doesn’t realize who she really is. In the course of Gemma’s investigation, she becomes injured. To save her, Leo takes her back to the kingdom of Morta, and there the trouble really begins.

The world-building is wonderful, full of gargoyles, strixes (think griffon-like beasts), and magic. Court politics play a large part, and Gemma does her best to navigate the danger while also trying to find out—along with Leo—what Prince Milo (Leo’s treacherous brother) wants with all the tearstone he’s been stealing.

Unfortunately, Gemma doesn’t seem to be very good at spying. She makes odd decisions and is pretty headstrong. Were the character in her late teens, this would be fitting. But it’s said she’s in her late twenties, which really didn’t seem consistent with her behavior. Honestly, this is the only part of the story that didn’t quite jibe.

The romantic tension between Leo and Gemma really works though, as Gemma is conflicted about what Leo once did to her and how he acts now. Leo seems to be helping her. He’s handsome and strong, and she’s definitely attracted. Yet they’re enemies…

For a fast-paced fantasy romance with appealing characters and a well-thought out plot, pick up a copy of CAPTURE THE CROWN.