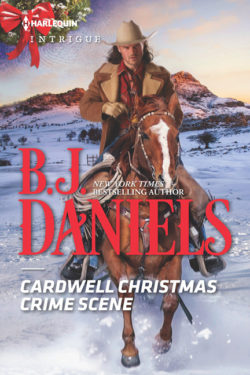 In CARDWELL CHRISTMAS CRIME SCENE by B.J. Daniels, DJ Justice enters her apartment only to realize something does not feel right. There are scratches around her newly installed door knob that should not be there. As she searches the apartment, she finds a small rag doll, the one she had as a child, under the duvet cover on her bed. She lost this doll years ago. However, upon closer inspection, DJ realizes this is not the doll she lost but an exact duplicate. Where did this doll come from and how did it get into her home?

Pinned to the dress of the doll, she finds a photo with three people in it. A man, woman, and small baby. The writing on the back of the photo contains the words: Your family. She is really confused now. Who are these people? Her father has always told her they had no family. She grew up thinking they were alone. What is going on?

She visits her father, Walter, who is in prison, to get answers. He claims to know nothing about the doll but after seeing the photo, he tells her she needs to get out of town. He doesn’t tell her why but does tell her that she will be hearing from his Montana family soon.  What Montana family? Her father has been a liar and schemer all of her life. Why should she believe what he is now saying? However, she can tell he is frightened of something.

Dana Cardwell Savage receives a call from her Uncle Walter (whom she thought was dead) telling her about her cousin DJ,  who she knows nothing about. DJ is all alone, and Walter wants her to know his family. His past sins are not his daughter’s, and he asks Dana to invite her to Montana to meet the family she never knew existed. Dana is intrigued and extends the invitation.

Walter also contacts the son of an old friend who owes him a huge debt. Beau Tanner has been waiting to pay this debt for years. Walter wants him to protect his daughter, DJ. Beau contacts Walter wanting to know why she needs protection, but Walter doesn’t have any details. He believes her mother’s family wants to harm her, and he wants her to stay hidden.

This starts the mystery. Someone wants DJ gone and does not care who might get in the way. If you are a lover of suspense books, you will enjoy CARDWELL CHRISTMAS CRIME SCENE. BJ Daniels is a wonderful mystery writer. I love series books, and this is number 5 in the Cardwell Cousins series. Each book can be read as a stand-alone, but I really like that characters from previous books are continued in this one. This is a great read!