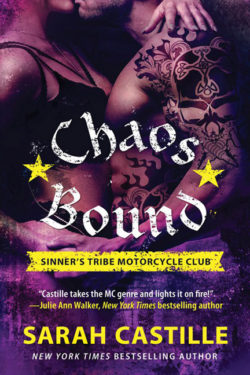 Holt “T-Rex” Savage spent months suffering at the hands of the Black Jacks MC and lost all hope that the Sinner’s Tribe MC would rescue him. Escape seems impossible until Naiya Kelly is thrown into the same dungeon and agrees to help him. Of course she wants something in return–protection. What she doesn’t realize is that Holt intends to use her to draw out the Black Jacks’ leader, Viper.

In addition to destroying Viper and the Black Jacks, Holt intends to enact revenge against the Sinner’s Tribe for abandoning him to Viper’s abuse. Naiya suffered her own abuse, as a teenager, at the hands of Viper. But she escaped and built a life of her own, free of biker gangs and their instability. Due to unforeseen circumstances she landed back in Viper’s hands. She craves a nice, safe existence. And she’d found that – that is until she meets Holt and discovers excitement, yearning, love, and a reason for living.

Sarah Castille’s SINNER’S TRIBE MOTORCYCLE CLUB series has captured my attention from the very first book. I’m thrilled to say I still love the series as much as I did from the get-go. With CHAOS BOUND, readers get to know Holt on a completely different level than we had previously. He’s angry with the Sinner’s Tribe, whom he’d always considered family. What was surprising was how Naiya understands Holt’s anger and yet is still able to see the situation from the Sinner’s Tribe’s perspective. She loves Holt enough to defy him time after time in order to help him come to grips with what happened to him.

I loved the simmering chemistry between Holt and Naiya and how she was never afraid to go toe-to-toe with him. Ms. Castille’s SINNER’S TRIBE MOTORCYCLE CLUB series has cemented my love for the MC genre. Outlaw bikers are a law unto themselves, and the author captures that intensity for her readers. Right or wrong, there’s no denying the appeal of men who are rough around the edges, do exactly what they want to do (as long as they have the support of their club brothers),  and are upfront and honest about their wants and needs.

As I’ve already said, I love this series. So be sure to check out the other titles available (and keep an eye out for more to come… at least I hope there will be)