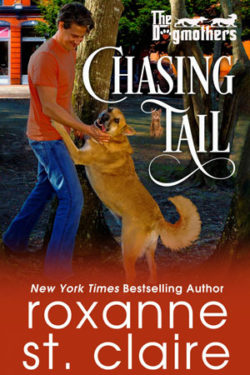 Lieutenant Connor Mahoney is a firefighter and EMT for Bitter Bark, North Carolina. He is the Dogfather’s nephew. On a search-and-rescue, he finds a stray dog who helps him locate a missing child. Connor decides his new canine friend is the perfect gimmick to win the mayor position. However, he never imagines the beautiful woman he encounters in town to be his competition. To qualify as candidates, Connor and Sadie Hartman fake an engagement. Will Connor and Sadie’s engagement become real?

Mercedes “Sadie” Hartman is a former deputy chief of staff for a DC congresswoman. She returns to her hometown to lick her wounds and find a new career path. Sadie and Connor share a past. To keep an unscrupulous man from winning the mayoral election, she decides to become a candidate. However, a two hundred-year-old rule stands in Sadie and Connor’s way. Can Sadie and Connor overcome their differences to become a real couple? Who will become the next mayor?

Connor is a total doll. I adore how active he is in the community. Connor may come across as a flirt and comedian, yet he still pays attention to the town and its people. I like how he and Sadie share a mutual dislike for their competition. The two settle their differences and band together to make sure the third candidate does not win the mayor position. What I love the most about Connor is how easily he adopted Frankendog. He recognizes the canine’s potential and handicaps.

Sadie is the type of heroine I enjoy reading. She is the perfect fit for the flirtatious Connor Mahoney. I adore Sadie’s code of ethics. She may have worked in the immoral world of politics; however, she never allowed it to corrupt her. It takes a strong soul to stand firm against such corruption. What I like the most about Sadie is how she starts to see the real Connor hidden beneath the jokes. It does take her a while to truly see that side of him he rarely shows.

CHASING TAIL is book three in Roxanne St. Claire’s canine contemporary series, THE DOGMOTHERS, a spinoff from her DOGFATHER series. I noticed that Gramma Finnie and Yiayia do not have many scenes in this story like they did in the previous books. I miss their antics. The two women never fail to amuse me, especially with their matchmaking and Gramma Finnie’s Irish proverbs. I love how the couples from the prior books show up throughout the story.

CHASING TAIL is a touching tale of two people overcoming their emotional and mental handicaps to be together. Roxanne St. Claire never disappoints me with her feel-good stories, and this book is no exception. I cannot wait to see what kind of woman the Dogmothers’ plan for John Santorini.