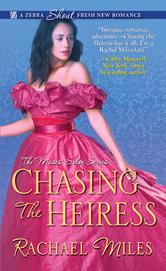 ‘CHASING THE HEIRESS’ by Rachael Miles is book two in the “The Muses’ Salon” series. It is the story of Lady Arabella Lucia Fairborne and Colin Somerville. I have not read the previous book ‘Jilting the Duke’. However, this is a standalone book.

Lady Arabella’s father is a military man. She has followed her father on many campaigns during the Napoleonic war. When he dies she becomes her aunt’s ward. After her childless aunt dies Lucy finds she has inherited her fortune.

Since Lucy has not reached her majority, her older male cousin plans to force her to marry so he will inherit instead.

Lucy takes her aunt’s will, and runs away. She disguises herself as a scullery maid and works in a tavern.

Colin Sommerville is a spy escorting a pregnant charge to London. When their carriage is attacked they are both wounded.

Colin and his charge are brought to the inn for care. Lucy’s experience nursing the wounded during the war gets her assigned to care for Colin.

Having soldiering in common, Colin and Lucy develop a bond.

(I had a bit of a problem with Colin having been shot, and yet, his first thoughts when he sees his caregiver are lustful?)

When Colin is well enough to travel he takes Lucy with him out of gratitude for saving his life. She never tells him why she is on the run. They fall deeper in love, and yet, never talk about their feelings with each other.

Once in London Lucy is captured by her cousin’s men. He imprisons her in a mental institution where she is sedated with opium.

In the meantime Colin thinks she abandoned him as she never showed up for their meeting, but they had agreed at the beginning of their relationship, that they would go their own ways after they reached London, still, the night before they had declared their love.

After grieving for several months he proposes to another woman.

A drugged Lucy is given back to her cousin. He takes her to her future husband’s ball in London where she and Colin rediscover each other. Colin along with his family who are in attendance, through planning and intrigue are able to get Lucy free of her cousin’s clutches.

There are a lot of plot lines in this book. The romance is slow, in my opinion. If you enjoy historical detail and intrigue you’ll want to go on this compelling journey with Lucy and Colin, in “CHASING THE HEIRESS”, by Rachael Miles.