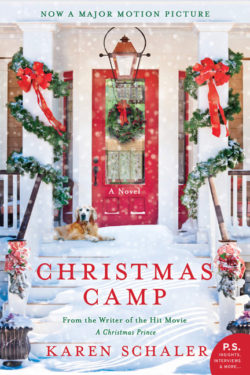 CHRISTMAS CAMP is the first book in the series by the same name, and it was truly all things Christmas even with a Grinch in the guise of Haley. (It’s also now a major motion picture, so read the book first then see the movie.)

Ben owns the inn where the Christmas Camp is held. (The descriptions of the decorations and themed rooms are so creative!) His son, Jeff, thinks his father needs to sell the inn since his mom has died and it’s too much for his father to run alone, plus he’s losing money. Jeff takes a week off to help his dad with the camp and try to convince him to sell.

Haley is sent to the camp by her boss to get in the spirit of Christmas. She goes because she wants a chance to lead a major ad campaign and make partner at the firm. She’s definitely not all in when she arrives, but it’s fun to see her attitude adjustment along the way. We get to meet the other guests and learn of their stories too. I love that the camp had activities related to all things Christmas, but also some that pertain to the community.

Haley and Jeff have an attraction, but are they too different? And will they be able to have any sort of relationship, even friendship? Ben’s dog, Max, is front and center and takes Haley under his “wing” by always being there for her, especially with his leash for their walks. As the week progresses, we learn of all the traditions of the inn and also those of Ben and his late wife.

The magic of Christmas shines through in CHRISTMAS CAMP. The interactions of the guests as they began to make memories and new traditions for their own Christmases are heartwarming. The descriptions of the mountains and the inn, all set in a winter wonderland, made me feel like I was there. I could smell the cookies baking as well as the hot chocolate and other foods served. It ‘s a nice touch that several recipes appear in the back of the book, as well as an excerpt of the next book in the series, CHRISTMAS CAMP WEDDING, which I actually read first. There is a nice flow to the story and so many poignant moments.

Ms. Schaler is a new-to-me author and I look forward to reading more of her books.