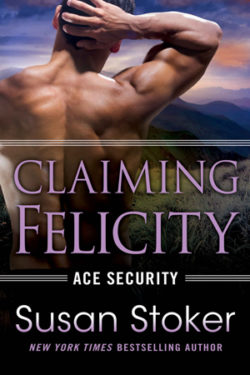 CLAIMING FELICITY is the 4th installment of the Ace Security Series by Susan Stoker, and Susan Stoker has delivered another tremendous book! Ryder Sinclair just found out that he has three half-brothers, all of whom comprise Ace Security, and travels to Ace Security’s Castle Rock headquarters to meet them. While meeting his half brothers, he also meets Felicity Jones, who is requesting that her co-ownership of the Hard Rock gym be bought out by the other co-owner, so she can escape from the area.

Ryder Sinclair sees a troubled, terrified soul in Felicity Jones. He convinces her to not leave town and to share her secrets, of which her close friends (including the men of Ace Security) know nothing about. Felicity Jones, who is actually Megan Parkins, has been running since she tried to save her college friend from her then-abusive boyfriend, Joseph Walters. Joseph became infatuated with destroying Megan after she tried to save her friend. Ryder’s connections with his previous job—Mountain Mercenaries—provides him the resources to find Joseph, though Joseph finds them first.

CLAIMING FELICITY is a powerful stand-alone romantic suspense with an HEA. The novel can be read alone, although for optimum reading pleasure, I would recommend reading the first three books in the series. For those looking for an alpha man who also can be incredibly tender, Ryder fits perfectly! What an excellent read, and I’m looking forward to reading the stories of the Mountain Mercenaries too!