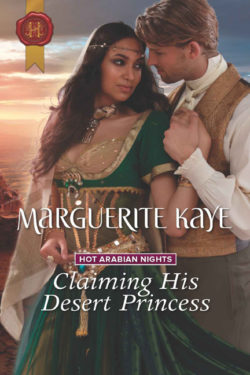 CLAIMING HIS DESERT PRINCESS is the fourth book in the HOT ARABIAN NIGHTS SERIES, and it did not disappoint. This is Christopher’s story, along with Princess Tahira, and their chemistry was immediate. Although they both had secrets they didn’t feel comfortable revealing to each other, the reader gets to know them a little at a time.
Christopher is in turmoil, since the last nine months he’s been searching for something regarding his amulet that will bring him peace and set him free. Tahira and Christopher are the central characters, and Tahira’s royal family plays an important role too. It’s interesting to see Tahira and her sisters’ interactions and what they think of their brother, the prince, who is ruler. Tahira’s feelings toward her brother are almost always negative, and it taints her younger sisters’ perceptions as well. Tahira’s sister-in-law, who is married to the prince, is difficult to like, but she does impart much wisdom to Tahira. The question is, will Tahira heed it?

The descriptions were vivid regarding the palace; the location where Christopher sets up camp, and the mine area had me forming pictures in my mind. The story is filled with family and friends, and lots of references to mining and the desert. The romance is fully developed and has a nice flow, the book rich in history. There’s wonderful closure and a happily ever after on several fronts. An epilogue would have been the icing on the cake, though. I enjoyed the historical note, which was a nice bonus and shed some light on the time period the book was set in–1815 in Arabia.

Marguerite Kaye is fast becoming one of my favorite authors. I always look forward to reading what she is up to next!