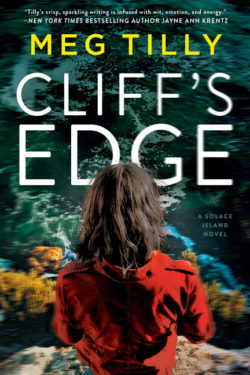 CLIFF’S EDGE is book two in the SOLACE ISLAND series, and it was better than I expected. It picks up where the first book in the series by the same name leaves off and reunites us with Maggie, Eve, Luke, and some of the townspeople of the island. This is Eve’s story, and it didn’t disappoint.

Eve unexpectedly meets Luke’s friend, Rhys, a movie star, when she is house-sitting Luke and Maggie’s house and watching their dog while they are away. Their first meeting does not go well at all, but things between them change. There is a nice flow to the story as they get to know each other, especially since Rhys, who loves to cook, agrees to pitch in at the cafe.

There are some sinister things happening on the island that have people on edge. Eve’s ex-boyfriend comes to visit, hoping for a reconciliation, but nothing for him goes as planned. As things take a turn for the worse, Eve is in the thick of the mess but shows what she’s made of!

The author does a great job describing the town and its many characters. I enjoyed getting to know Rhys and his relationship with his mom. There are definitely twists and turns to the story, though a few things were glossed over. I look forward to reading the next book in the series, HIDDEN COVE.