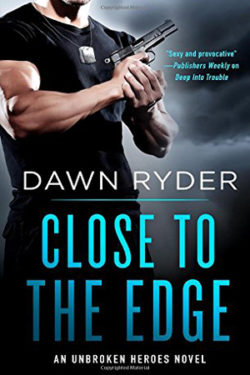 Jenna Henson has a nice life.  She has an interesting job as a combustion expert (she loves blowing things up) but also works as a chef in her down time. When asked by a friend to help him cater a party, she accepts, not knowing it will change her life forever.

Agent Dare Servant is on the hunt. He and his team have been trying to bring to justice those who are involved in a prostitution ring that has resulted in the deaths of several young women. When he learns his main suspect is having a party, he breaks into the festivities to plant listening devices, hoping to gather information he can use against him. However, the house was supposed to be empty. He didn’t expect to run into a young woman in the kitchen. Not knowing whether or not she is involved with the prostitution crime ring, he takes her into custody for questioning.

Jenna has no clue what is going on. She was getting food ready for a party, and the next thing she knows, she is grabbed by a strange man who is now interrogating her as if she has done something wrong. This is the beginning of an action adventure story that had me on the edge of my seat.

Dare and Jenna go on a journey that leaves them both reeling. When Dare figures out Jenna was at the wrong place at the wrong time and is innocent of any crimes, he knows her life is in danger. She is fearless, and before he knows what is happening, Dare realizes there’s a deep attraction beginning between them. He has his life planned out, and it doesn’t include getting involved with anyone. But he can’t help but admire Jenna and her ability to stand up to him, as well as to fight for what is right.

CLOSE TO THE EDGE: AN UNBROKEN HEROES NOVEL is exciting and such an intense, fun read. I was on a roller coaster ride that kept going on and on until finally, when the end came, I was exhausted.  I loved this story!