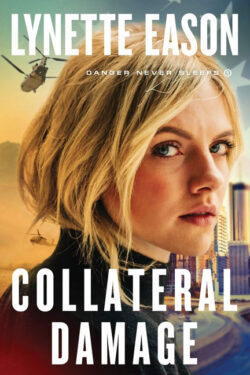 COLLATERAL DAMAGE by Lynette Eason is a fast-paced romantic suspense. I was hooked from the first page when a bomb goes off in a cafe in Afghanistan. It kills a soldier suspected of treason and seriously injuries Brooke Adams, a military psychiatrist. Before the soldier dies, he gives Brooke a bracelet, tells her he is not a traitor, and to tell his wife.

A story about the bombing is released with pictures of Brooke talking to the soldier as he died. Asher sees the pictures and makes an appointment with Brooke. He’s having problems with PTSD and thinks she could help him. He arrives at the office the next day and finds the secretary dead and fights off the attacker.

After the police take their statements, Asher drives Brooke home to discover an intruder in her home. Asher fights him, but he escapes. They realize the attack at the office and her home are connected and realize Brooke was the intended victim, not the secretary.

At every turn, Asher and Brooke are on the run for their lives, and at the same time. their attraction to each other grows.

There are continual twists and turns that keep you turning pages. I loved it from beginning to end. I did have a few problems with the book, though.  It was a little too easy to guess the mystery, and I kept wondering why the characters weren’t connecting the dots. Another objection I had was a secondary character wanted to adopt an Afghani girl but couldn’t because she was Christian and the girl was Muslim. She wouldn’t lie to save the girl. I found that troubling because I think someone that really cared enough about a child would do anything, including lie to save them. My last problem was Asher’s brother. He was a little over-the-top for my tastes. But even so, I gave this a 4.5 stars. An outstanding romantic suspense.