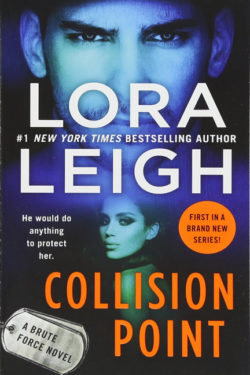 I am a huge fan of Lora Leigh, but COLLISION POINT falls a little bit short of her usual amazing stories. I like the characters and the premise of the story but wish there were more depth and detail of the relationship between the two main characters. That being said, I did enjoy reading the book and was not disappointed in the romantic suspense.

Amara Resnova cannot remember the last year of her life. She was kidnapped and knows she was brutally beaten but can’t remember–or maybe does not want to remember–what happened during that time in captivity and when she was rescued. Her father is a crime boss with vicious enemies she believes want her dead. All she knows is that she needs help and seeks out her former bodyguard, Riordan Malone.

Riordan is surprised when Amara shows up at his door. Being her bodyguard was way more than just a job. They had an amazing relationship but kept it secret because of her father. She was the woman of his dreams, yet she never contacted him after he almost died rescuing her. Technically, his injuries were so severe, he did die more than once but eventually recovered. When she asks for his help, he can’t believe it. She doesn’t acknowledge their past relationship. He doesn’t know why he should help her again until he finds out she can’t remember what happened between them and what happened during her rescue.

COLLISION POINT has action, adventure, intrigue, danger, and romance. As summer is approaching, this makes for a good read.