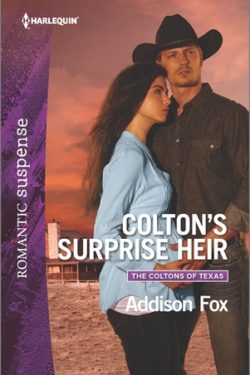 COLTON’S SURPRISE HEIR (THE COLTONS OF TEXAS #2) is filled with suspense that surrounds the Colton family.  The siblings, minus one, are all present in the story, trying to find out where their mom’s body was buried by their dad after he murdered her twenty years ago.  He’s a serial killer who’s behind bars but wants to make peace with his offspring now that he’s ill and doesn’t have long to live.

Fox’s COLTON’S SURPRISE HEIR was not what I expected.  There are at least three storylines going on involving murders and copycat murders and other crimes including stalking.  There’s also one that involves an unexpected baby on the way.  The stories intertwine seamlessly but this is also Ethan and Lizzie’s story. At times it’s hot and other times they are trying to find their way with each other especially since they only had a one night stand about six months before after not seeing each other for over ten years and a surprise is on its way.

The Coltons and Lizzie grew up in foster homes but seem to have made decent lives for themselves – except for the missing sibling, Josie, who is the youngest Colton and was Lizzie’s best friend. There is a darkness throughout since they are the children of a serial killer some who have gone into law enforcement as a result. The copycat murderer killing women with names in alphabetical order in their county isn’t helping nor is whoever is stalking Lizzie and wants her and her baby to be theirs!

The descriptions of the land and the letters to their father are vivid and make me feel that I am there.  There are cowboys, law enforcement, family and friends, coworkers, dinners and meetings.  Emotions run high throughout – tears, sadness, anger, fear, hurt, laughter, some happiness, loving and love. There was closure on one front but still a lot of loose ends.  It seems understandable since there are ten more books regarding the Coltons but it wasn’t what I expected going in.

Fox is a new to me author and I will look for her other romantic suspense and contemporary romance books and add them to my always growing to be read pile.  I also hope to find the other books in this series so loose ends can be tied up.