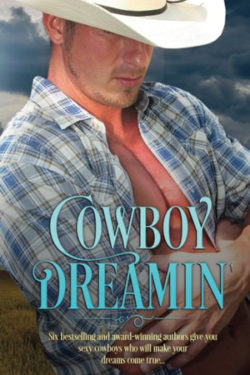 COWBOY DREAMIN’ has six western romance stories, one by each of the listed authors, several of whom were part of the COWBOY SIX PACK anthology of cowboy stories, which I’ve also read. Western romances are one of my favorite genres, and all the books had cowboys front and center. But the stories and characters were all so different from each other.

COWBOY LOVE was not what I was expecting, and it was more erotica than a contemporary western. Amy, a nurse, is very naive when it comes to men and love.  She can’t read their feelings or their intentions. Jack, her ex-boyfriend, is a perfect example with his dark side as well as her roping partner, Jason, who she thinks of as a friend. But Jason thinks there’s more and that she’s his. Enter cowboy Tanner, who is a country music wannabe who also works on the family ranch helping his dad. Things with Tanner get hot fast. They both have feelings for each other. Whereas he’s all in to see where it takes them, she’s hot one minute and cold the next–to the extent that she’s pushing him away. Amy was hard to like but had her moments of sweetness and caring, yet not when doubts arose about Jack’s intentions. Tanner was too fast for my tastes, especially with some of his affection and loving in public. There were quite a few unexpected twists and turns to the story, and the family connection between Amy and Tanner’s dad was interesting. There was nice closure, especially with the epilogue, but I would have liked it to go a little further. There was the requisite happily-ever-after that didn’t look like it would come to pass, but I was happy it did. Not my favorite story in the collection, but I would give another book of Sullivan’s a try to see if it was more to my liking.

GONE COUNTRY is the second book by Merritt that I’ve read, and it didn’t disappoint.  It’s a second-chance-at-love story with Willow and Jake, a music star who left five years before to live his dream. Willow was the one he left behind, along with the small town in Texas where he grew up…but that’s not all! There was a depth to the characters and the storyline, along with both heartwarming and heartbreaking moments. Watching Jake try to reconnect with Willow had feel-good moments along with sadness. He seems sincere that she’s the love he never forgot. Her little girl, Bree, is a whirlwind and wise beyond her years. The story was filled with family and romance, as well as a few surprises.  There’s a happily-ever-after that played out better than I’d hoped, but there still seemed more story to tell. One of my favorite stories in the book.

TIED TO A DREAM by Stephanie Berget

TIED TO A DREAM is the first book in the anthology that really had rodeos at its core, and it didn’t disappoint. Frannie is trying to figure out her life, now that her mom died and she has to sell her home. Enter her best friend Amy’s cousin, Rob, and things get interesting fast. Both have been burned in the love department before, and neither is looking for anything more than friendship. They both seem to be there for each other when there’s trouble brewing, but is that enough? There is a nice flow to the story, although some of the characters are on the sleazy side (both male and female.) There is a depth to the characters and lots of rodeo and horses. There is a happily-ever-after and nice closure, especially with the epilogue. I look forward to reading more books by Berget. This was one of my favorite books in the anthology.

EIGHT SECONDS TO LOVE is Jared and Lacey’s story, and what a story it is. Lacey has had a crush on Jared since she was a teen and always followed him and her cousin, Brett, around. Their paths cross years later when she’s in the hospital after a bull riding accident, and it’s an interesting reunion. He’s now a nurse in an ER, and she’s been a bull rider for ten years. She’s worked hard trying to make it to the top in a man’s world but not getting much support from her parents and others. Jared hates that Lacey wants to go back to the bull riding finals even though she’s injured and needs surgery. She doesn’t want to hear it. Watching them take one step forward and two steps back was heart-wrenching, but watching their feelings for each other grow was wonderful. There are twists and turns to the story with a nice flow and a depth to the characters. The vivid scenic descriptions made me feel like I was there. The story didn’t play out the way I expected but left enough loose ends for more stories, since this is the first book in the TUMBLING CREEK RANCH SERIES. I for one am looking forward to more, as this was definitely my favorite book in the boxed set.

STETSONS & STALLIONS was a sweet romance with some darkness woven throughout including loss, sabotage, accidents and death. Jodi and Glenn don’t hit it off when they first meet, but there seems to be an attraction that both are trying to fight.  When they are together and honest with each other, there’s a connection that can’t be beat. The story is filled with horses, ranches, and family surrounding the characters’ journey to falling in love. There is nice closure and a happily-ever-after, but the ending left me wanting more. I look forward to reading more books by Hadley, a new-to-me author.

HITTING THE RIGHT NOTE was fast paced but too short for my liking. Peyton and Marshall hit it off immediately, especially since she has a good voice and can step into his ex-duet partner’s shoes. Filled with musicians, family, friends, and a roller coaster of emotion, HITTING THE RIGHT NOTE was enjoyable but problematic for me. The buildup to the romance just wasn’t there, and the ending seemed rushed. I enjoyed the blurbs of Lindun’s other stories that were at the back of the book though.