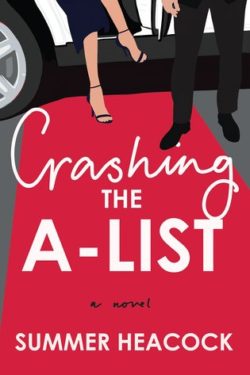 CRASHING THE A-LIST is a hard to resist comedic romance novel. It’s a he said, she said story containing blackmail, angst, laughter and a roller coaster romance. It stars Clara Montgomery, a down on her luck, pretty gal, whose life is in the gutter. Recently laid off from her job as an editor, homeless and emotionally spent, her brother, Tom, suggests she stay with him and his fiancee’ at his place until she gets back on her feet. Life sucks sometimes.

So, Clara sleeps on his crazy couch, her possessions are in storage and she lands a job working at the exact same storage unit. While cleaning out the units, she discovers a cache of papers on an escort service. Her and her girlfriend, Cici, read through them, giggle insanely and spot a famous actor’s name listed, Caspian Tiddleswich. Cici has a light bulb moment, spouting her crazy idea to Clara, that she should sell the info to a gossip mag to get rich quick. Clara’s life unravels after stumbling upon the incriminating papers. Cici and Clara’s initial idea backfires when she drunkenly calls Caspian with her find. Then he mistakes her dramatic attempts, pleading she won’t sell him out, as dishonesty. Then, Caspian’s public relations team gets wind of Clara, aha a girlfriend, and spins it as publicity. Caspian is furious with Clara and her supposed extortion scheme. Two can play at that game!

Caspian hatches his own blackmail plan. He enacts punishment that she act as his girlfriend, anytime he wants and attend all his public functions with him. But then Clara finds herself falling for the dashing Brit. What can possibly happen next?

If you are looking for a laugh-out-loud, dramatic romance with sass, CRASHING THE A-LIST is just the ticket! A down and out editor, Clara, and a famous British actor, Caspian Tiddleswich, clash big time over mistaken intentions. I laughed until my sides hurt over Clara and her antics! She is the real deal with flaws, clumsiness, and a big heart. I loved the best friend relationship she has with Cici, who totally has her back. Cici is an absolute gem! There are fantastic girlfriend moments, crazy dialogue and knock your socks off drama. The plot has funny moments in spades, especially at the storage unit. I fell in love with all the characters, even Uncle Charlie, owner of the storage units. The drama between Caspian and Clara is cataclysmic and I wondered how they would sort everything out. The author deftly unties all the knots! CRASHING THE A-LIST is just like a fizzy mimosa with strawberries, sizzling, satisfying and sweetly surprising!