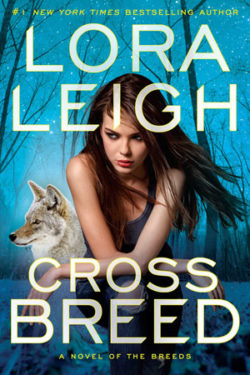 Cassie Sinclair is special. She was genetically altered and is a hybrid mixture of wolf, coyote, and human. She has unique abilities, which puts most Breeds in awe of her. But there is a segment of others who fear her and want her dead. She loves her family and will do anything for them, including offering her body as payment to the man she believes can save her sister, who has been kidnapped.

He is known as Dog. A coyote breed who is feared by many. He has known for years that Cassie is his mate but has kept his distance while keeping a close eye on her, allowing her to grow up before claiming her as his own. When her sister is taken, he takes advantage of her concern and fear by making a bargain with Cassie—a night of passion in exchange for her sister’s safe return. What Cassie doesn’t know is that Dog is her mate and once mated, there is no going back. She is stuck with him.

CROSS BREED is the rocky love story of Cassie and Dog, both of whom have appeared in previous books within the Breed Series. As Cassie comes to grips with the fact that she is now mated to Dog, he realizes she is in extreme danger because of her unusual genetics and will do whatever necessary to keep her safe. Dog is not only dealing with the threat to Cassie, but there is also a threat of an all-out war between the Breeds and humans who despise them and want them destroyed.

This is the eighteenth book in the Breed Series, one so many have been waiting for, and it is as fascinating and exciting as all the rest. There is action, adventure, and very smokin’, hot lovin’. I have waited a long time to see if Cassie would have her own story, but to read her love interest is Dog, a character I have wanted to smack once or twice, really rocked. This is a great read and will not be a disappointment to fans of this series.