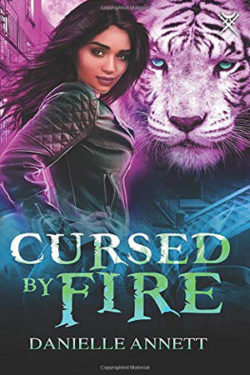 CURSED BY FIRE by Danielle Annett is the first book in the BLOOD AND MAGIC urban fantasy series. I was hooked from the first page. I loved the setting (Spokane, Washington) and the characters: Aria is a pysker (has the ability to make fire with her body), Mike Sanborn, Aria’s boss, runs Sanborn Place and is father figure to her, Mel is a harpie who lives next door to Aria, and James is part of the wolf pack and a shifter.

The story opens with a seven-year-old boy who is murdered. It’s thought the boy was murdered by a vampire, and Aria is determined to find the person or persons responsible and bring them to justice. James partners with her because the murdered boy was a shifter, and James is representing the pack.

As James and Aria begin the investigation, there are two more murders, this time a vampire and another shifter. While Aria is investigating, she is attacked by a vampire and saved by a mysterious stranger. Turns out, he’s part of the Human Movement where Aria learns more about Psykers.

There is a surprise twist with the Human Movement. The attraction between Aria and James is a slow-build, but it’s obvious the relationship will continue into future books. I really enjoyed this book and will be reading the next in the series.