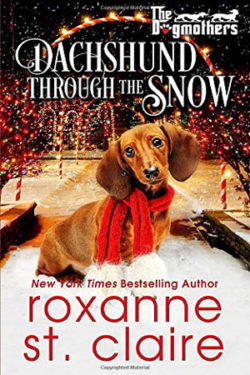 Agnes Santorini, Yiayia to her grandchildren, is the Santorini clan’s matriarch. She learns about the availability of a certain dachshund, the kind she had always wanted. Agnes is willing to pay any price for this dog, even swallow her prickly pride. Along with her roommate and the woman’s great-granddaughter, the trio embark on a Christmas style scavenger hunt. As they gather each thing on their list, Agnes begrudgingly shares her past. Will Agnes finally get her dream dog? Or will redemption come in another guise?

Agnes is one of those characters that it takes a while to warm up to. She is an embittered woman trying to make amends with her remaining family. I admire how Agnes tries to change her ways. She sometimes slips up, but she never allows it to stop her from becoming a better person. I like Gramma Finnie’s influence on Agnes. The two women’s personalities often clash, yet Finnie refuses to let Agnes revert to her old self. I also like the fact that Agnes’s romance with her late husband started off rocky. What I adore the most about Agnes is that she owns two dachshunds. I am partial to that particular dog breed since I own three doxies.

DACHSHUND THROUGH THE SNOW is book three in Roxanne St. Claire’s heartening, dog-related series, THE DOGMOTHERS. This story can easily stand alone. However, it is best to read the prior books and the spin off, to better understand the three families and how far they have come.

I adore the fact that a bearded dragon makes a small appearance in the story. They are one animal I never expected to see in a book, especially a romance novel. I smiled when I read how the reptile once belonged to a woman. Along with dachshunds, I also have a bearded dragon, one who prefers me over the males in my household.

DACHSHUND THROUGH THE SNOW is a heart-warming story of an aging woman’s search for redemption during the Christmas season. I am generally not one for Christmas stories, yet this one warmed my heart. I cannot wait to read more of the Dogmothers’ shenanigans.