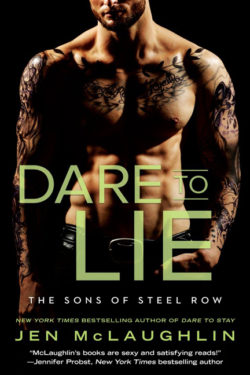 Scotty Donahue is an undercover DEA agent. His main assignment is to monitor the Sons of Steel Row street gang from within. Scotty wants to clean Boston’s streets of the gang’s taint. He intends to keep Skylar Daniels at arm’s length, however, Scotty courts danger by becoming intimately involved with her. Tensions with a rival street gang spells trouble for him and the Sons of Steel Row. Can Scotty protect Skylar from Bitter Hill’s vengeance while maintaining his cover? Or will Skylar’s older brother throw a wrench in their happiness?

Skylar “Sky” Daniels is the unknown, younger sister of Tate Daniels, the leader of the Sons of Steel Row gang. She is a medical student who studies pediatrics. Skylar meets Scotty Donahue at her sorority’s bachelors’ auction and wins a date with him. She knows nothing about his or her brother’s involvement with the Sons of Steel Row. Skylar throws caution to the wind to be with Scotty, however, the infuriating man sends her mixed signals. Will Skylar learn of Scotty’s dual lives? Can she accept what he truly is?

I remember disliking Scotty at the beginning of the series. My opinion of him changed, however, when he reveals his true self at the end of the first book. I admire the risks Scotty takes to ensure not only his brother’s happiness but his friend’s despite exposing his cover. I empathize with his conflicted dividedness between the DEA and the Sons of Steel Row. Scotty does not let his allegiance to the gang change his dreams of cleaning Boston’s streets. I like how Skylar gives Scotty the opportunity to shed the lies and simply be himself for once.

Skylar is unlike most of the heroines I generally enjoy. She is neither too strong nor weak but a perfect symmetry of both. Skylar relies on her intuitive ability to read people, an ability she plans to use in her chosen field. I like how this ability cracks a fissure in Scotty’s well-fortified defenses, that she sees the true man buried beneath all the lies. Skylar tolerates her brother’s need to safeguard her and understands his reasons. I admire Skylar’s capability of putting her foot down on her brother’s overprotectiveness.

DARE TO LIE is book three in Jen McLaughlin’s romantic-suspense series, THE SONS OF STEEL ROW. I love that Chris O’Brien from DARE TO STAY, book two, plays an integral role in this story. But what I like the most is how Marco, a side character from book one’s DARE TO RUN, also makes appearances. I am glad the author incorporated Marco into the story by showing what became of him since DARE TO RUN’s ending.

DARE TO LIE is an enthralling tale of two people daring danger by finding happiness with each other. I wonder who the author plans on writing next. I hope she considers either Tate Daniel’s book or one of Scotty’s agent comrades.