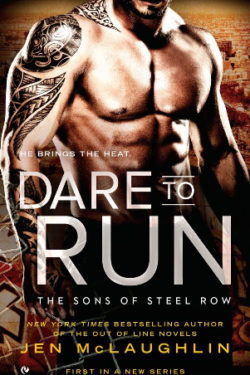 Lucas Donahue is a member of the Sons of Steel Rose, a gang in Boston’s slums. He runs a mechanic shop owned by the gang as a front for money laundering. Lucas suspects someone is trying to kill him, and he has a difficult time accepting who the culprit may be. Despite knowing the ramifications of interfering with a rival gang, Lucas rescues the cute blonde bartender from the Bitter Hill gang’s evil intentions. To keep the Bitter Hill guys from bothering her further, he claims Heidi as his woman. Heidi tempts Lucas to want a better life, a normal one away from gang violence and his Sons of Steel Row brethren. In order to give her a chance at a future, he intends to sacrifice everything.

Heidi Greene owns and runs a bar located in the Sons of Steel Row territory. She prefers to stay neutral and not affiliate with any of the slum’s gangs. Heidi anticipates trouble from one of the gangs frequenting her bar, and she never expects Lucas to be her savior. Lucas’s violent world scares her, but that does not stop Heidi from masquerading as his girlfriend. She empathizes with Lucas’s plight and wants to help him no matter the cost.

The first thing about Lucas that grabbed my interest is the fact he is a red-head. I have a major weakness for freckled, red-heads. I believe, outside of Highlander books, red-headed heroes are somewhat rare. I found it incredibly cute that Lucas has freckles on his shoulders and that he appears embarrassed by them. Lucas has a cynical outlook on life, having seen the ugliness life offers, yet that jadedness did not stop him from doing what he perceives as right. I empathize with his internal struggle, how despite the growing evidence, Lucas did not want to give up on his baby brother. I like that Heidi becomes Lucas’s shining beacon in the shady blackness of his world.

I like Heidi. She and Lucas have much in common, both being survivors. Heidi is not afraid to stand up to what she believes in, nor does she allow anyone to walk over her, Lucas included. She is able to see and recognize the good in Lucas that he is blind to. I admire Heidi’s refusal to give up on him or tolerate his crap. I did have one problem with her. I expected an ex-runaway, one who is in constant proximity of the gangs, to recognize the dangers to her life. There is a fine line between stubbornness and foolishness, and Heidi’s certainty that she could hold her own against the gangs smacked on foolishness to me.

DARE TO RUN is book one in Jen McLaughlin’s suspense romance, THE SONS OF STEEL ROW. Jen McLaughlin’s a new-to-me-author. It did take me a while to assimilate to the first person point-of-view but in no way did that detract my enjoyment of the story. I like how the author switches between Lucas and Heidi with each new chapter, allowing insight on each person’s thoughts and feelings as the plot progressed.

DARE TO RUN is a gritty and dark suspense romance that explores the vicious and uncertain side of gang life. I felt a little unsure how I would like a book where the hero is in a gang, yet despite my reservations, I soon found myself wrapped up in the characters and the story. I cannot wait to delve into the next book, DARE TO STAY.