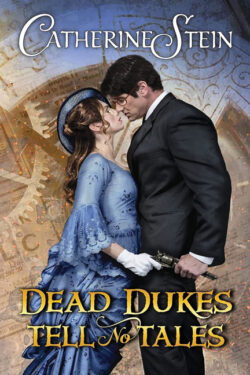 Clifford “Cliff” Kinsley is a scrap metal entrepreneur from Chicago, Illinois. He inherits a dukedom in England and a mountain of debt. Cliff wants to kill off the Duke of Hartleigh, so he and his daughter can escape to California. The pirate next door may be the answer to his prayers. Cliff soon finds himself and his impressionable daughter swept up in Sabine Diebin’s treasure hunt. What dangers will the three find on their adventures? Can Cliff help Sabine find the treasure she seeks? Or will he be a hindrance?

Sabine Diebin is the renowned airship pirate La Capitaine. She purchases the late Duke of Hartleigh’s ducal manor in hopes of finding clues to a particular treasure. Sabine accepts the new duke’s offer to clear out the clutter his predecessor left behind. Cliff proves beneficial in deciphering the clues they find. She reluctantly drags him and his daughter on her dangerous treasure hunt. Can Sabine resist Cliff’s brand of temptation? Will they outsmart Redbeard to find the elusive treasure?

Clifford is such a fun and delightful character. He is the opposite of what I pictured a duke to be. I would like to see more of his kind in historical romance books. It would be a nice change of pace. I adore Cliff’s bumbling awkwardness. Things never go the way he expects, yet he manages to make the best of his situations. What I love the most about Cliff is his devotion to his daughter. Everything he does is for her benefit.

Sabine is everything I enjoy in a heroine. She is wily and independent with a hidden, vulnerable side. I like how Sabine proves that not all women need a man’s protection. Instead, she protects Cliff several times in their misadventures. What I love the most about Sabine is her interaction with Cliff’s daughter, Lola. She adores the seven-year-old’s spirit and energy. Sabine encourages Lola to be whatever she wants.

DEAD DUKES TELL NO TALES is book three in Catherine Stein’s steampunk romance series, SASS AND STREAM. The story can easily stand alone. There is no ongoing plot or reoccurring characters to require reading the prior two books. This story just focuses on Sabine and Clifford’s escapades. I am new to this author. I could not help but enjoy the humor she infused into her writing style. It made it fun to read.

DEAD DUKES TELL NO TALES is a zany tale of an unlikely partnership between a duke and an airship pirate, and their hilarious hijinks. This story did not disappoint. It filled my steampunk needs.