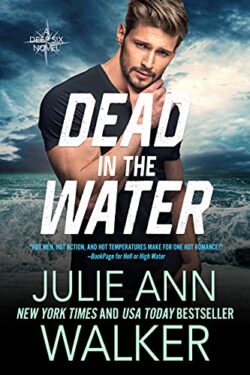 Dalton “Doc” Simmons co-partners Deep Six Salvage with five of his former Navy Seal brethren. He should be excited about them finding the legendary Santa Cristina’s sunken treasure. However, an incoming hurricane threatens to scatter the hoard from its resting place. Doc has no intention of letting another woman in his heart, yet he cannot ignore Camilla D’ Angelo or her smart mouth. The upcoming storm is not the only danger the two face on the island. Can Doc finally let go of his late wife’s memory? Or will her ghost destroy a possibility with Cami?

Camilla “Cami” D’Angelo is a lawyer who specializes in property disputes. She manages to find a loophole that allows the Deep Six Salvage crew to keep their treasure. Cami refuses to mix business with pleasure; however, Doc tempts her to break that rule. She cannot ignore the sizzling chemistry brewing between them. The hurricane allows them the chance to act on their shared attraction, but gun-toting men destroy their time together. Will Cami confess her true feelings to Doc? Or will he unwittingly break her heart?

Doc is one heck of a puppeteer. That man played with my heartstrings throughout the series. I understand Doc’s reluctance to move on after his wife’s death. That is no easy task to do, especially when the person had been your everything. I like how Doc behaves as a big brother to everyone on the island. He is not only there for his fellow Navy Seal brethren but the women too. I like to think they are the reason Doc continues to forge onward in life. What I adore the most about Doc is his humanity. He may be a warrior, but he hates taking another’s life, even if they threaten his own.

I have liked Cami from the moment she was introduced in the series. She is everything I adore in a heroine. Cami may be independent and sassy, but she also possesses a vulnerable side. I like Cami’s morality. She is a woman with a strong sense of right and wrong despite her father’s background. What I love the most about Cami is her unwillingness to compete with Doc’s first wife. She has no intention of replacing the woman. Cami also understands that Lily’s memory will always live on inside Doc’s mind, and she is fine with that.

DEAD IN THE WATER is the sixth book in Julie Ann Walker’s romantic suspense series, DEEP SIX.  I recommend reading the prior five books to best understand the brotherhood the six men share. It also explains the reason why they fell into treasure hunting. Plus, Doc and Cami’s lively interactions take place in the background of the last few books. I like the secondary romance between the island’s resident hippie and philosopher, John, and Dana Levine.

DEAD IN THE WATER is the dramatic conclusion to a wondrous series. I am sad that there will be no more books. The author does a marvelous job of allowing us readers a glimpse of the former couples’ futures. In my opinion, it was the perfect way to end the series.