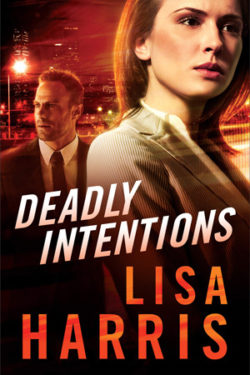 in DEADLY INTENTIONS by Lisa Harris, Caitlyn Lindsey is a research scientist running for her life. She believes her team members are being killed because of information they have discovered about the project they were working on. Although the deaths are deemed natural by the police, Caitlyn believes differently. When her life is suddenly threatened, she realizes she is in terrible danger.

Detective Josh Soloman arrived home one evening to find his wife mortally injured. He believes she was the victim of a home invasion robbery. However, when Caitlyn enters his life and tells him her suspicions that his wife was murdered (because of what she discovered about the research project they were working on,) Josh does not immediately believe her…until strange things started happening.

Caitlyn has had her life threatened several times. Josh is suddenly accused of being responsible for his wife’s death. Working together, they try to unravel the truth behind what is happening and who is responsible.

DEADLY INTENTIONS is a roller coaster ride that is smartly written. I couldn’t put it down until the end. Lisa Harris did an excellent job creating a book with compelling characters that take you on one heck of a journey.