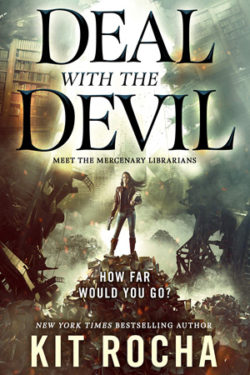 In this post-apocalyptic scifi book (with elements of romance), DEAL WITH THE DEVIL, from bestselling duo, Kit Rocha, information is an important commodity. Nina is a mercenary librarian who trades in information. She and her friends do their best to preserve what used to be a thriving America.

When they encounter a squad of super soldiers, they have no idea what they’re getting into. Knox, captain of the rogue Silver Devils, is doing his best to keep his men safe. They’ve gone AWOL so as not to have to kill innocents, which their command is bent on doing. It’s a fight to survive, but Knox has responsibilities to his men and those he swore to protect.

Nina could be the answer to his problems. Turn her in and be promised freedom in return. Because Nina is much more than she seems.

The rich setting, multilayered characters, and real conflict make this one book a MUST READ! Kit Rocha are at their best when writing strong heroines and strong-seeming, vulnerable heroes.

DEAL WITH THE DEVIL is a fascinating beginning to a new series that will thrill readers and librarians–ha!–alike. A terrific, creative spin on the post-apocalyptic genre. Somewhat dark, due to the genre, yet uplifting, adventurous, and yes, romantic too.