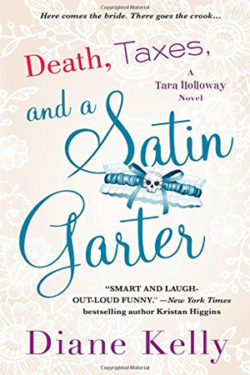 At five foot-two, IRS Special Agent Tara Holloway, with outstanding marksmanship and the ability to kick butt, is a force to be reckoned with. She is brought in after other attempts to collect a tax debt have failed. But this time, not only does Tara have to handle her caseload; she is maid of honor for her friend’s upcoming wedding, including planning a bachelorette party. Where will she find the time for all she has to do? Her latest mission with the IRS is a radio host named Flo Cash who is the star of The Flo Cash Cash Flow Show. Flo, a tax dodger, has been giving her listeners some shady advice and she uses the barter system to cover expenses, thus leaving the IRS out of the equation. In fact, with the income reported by Flo, the station should not even be up and running. Tara is exasperated, but steadfast, as she keeps after Flo, determined to bring to light the radio host’s wrongdoing. Still, everyone involved seems to have clammed up, making it nearly impossible for Tara to gain any information, but Tara is nothing if not determined.

As if that is not enough, Tara also has another case on her hands, although this one involves much less money. Three women have joined to bring a catfishing Casanova to his knees. The women met him on an online dating site and he has relieved each of them not only of two thousand dollars each, but also of their dignity. The women want him punished, even if they don’t get their money back. With such a small amount of money, Tara figures he will only get a slap on the wrist, but if she can find more of his victims, this predator could face stiffer penalties.

In between investigating, Tara is doing all she can to fulfill her maid of honor duties as the wedding date draws closer. But when Tara catches the bouquet and her boyfriend, the sexy Senior Special Agent Nick Pratt, catches the satin garter, could another wedding be imminent?

A fun tale, DEATH, TAXES AND A SATIN GARTER, the tenth novel in award winning author Diane Kelly’s TARA HOLLOWAY series, is a hilarious, action-packed, romantic cozy mystery that will keep readers engrossed. An IRS Special Agent doesn’t seem like a very likeable character, but Tara is unforgettable, even though things don’t always turn out the way she plans. I love the storyline between Tara and Nick. That bit of romance makes her more realistic, as do her flaws when she is less than perfect. The chemistry between Tara and Nick is hot and I enjoy watching them discuss their cases and bounce ideas off each other. Coming from similar backgrounds with many of the same likes and dislikes, these two complement each other and are wonderful together.

Set in Dallas, this story is packed with Texas humor, a delightful plot, loads of action, romance, and mystery that will keep you guessing. I have enjoyed all of the books in this series so far and though each one can be read as a standalone, I believe that once you read one, you will seek out the rest of this intriguing series. I am a huge fan of Ms. Kelly’s works and cannot wait to read her next installment, DEATH, TAXES AND SWEET POTATO FRIES, due to release in February 2017.