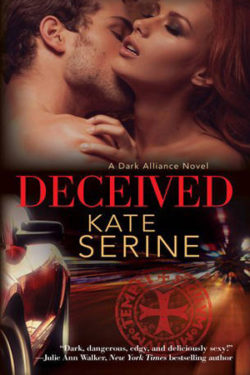 In DECEIVED by Kate Serine, Sarah Scoffield’s life is filled with secrets and lies. Sarah is healing from the death of her husband and raising her eleven year old son, Eli, alone. She loves her new job as a first grade teacher, living in a small town. Life is slowly starting to settle down for Sarah and Eli, until a stranger enters it claiming she and her son are in danger.

Luke Rogan is an operative for the Dark Alliance, which is another name for the Knights Templar. This centuries-old organization has made it their mission throughout the years to protect the world by righting wrongs committed by those who are truly evil.

Luke has captured a traitor who has sold classified secrets for profit and is taking him to be interrogated. He is surprised to discover a high ranking official within the Knights Templar, Senator Hal Blake, is also in attendance. This is not usual protocol for this type of operation. As he is trying to figure out what’s going on, shots ring out. The traitor is killed, and Senator Blake has been critically shot. Before collapsing into unconsciousness, Senator Blake begs Luke to find and protect his grandson, Eli, who unknowingly has been entrusted with his grandfather’s secrets and those of the Knights Templar–which makes Eli a target for their enemies.

This begins the exciting roller coaster ride being taken by Luke, Sarah, and Eli. Someone has hacked into the Dark Alliance’s operator database and is hunting them. Can Luke keep them safe? Can they discover the traitor within the organization before someone is killed? While on the run, Sarah discovers her entire life has been nothing but a lie, from her father’s real work to her marriage. Can she trust Luke with her precious son? Can she trust herself, because she is attracted to Luke and her faith in her own judgement has been severely damaged?

I really enjoyed this book. What was unusual is that you learn who the traitor is early on, and it drives you nuts watching the games and manipulation that is played on those who are trying to figure out who he or she is.

For lovers of romantic suspense, DECEIVED is the real deal. I couldn’t put the book down until the end and am looking forward to the next in this series by author Kate Serine. An awesome read.