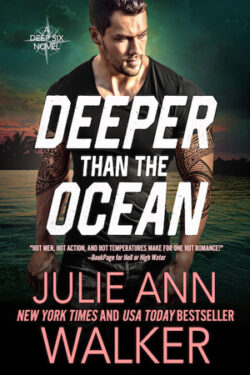 Ray “Wolf” Roanhorse is a former Navy Seal. He and his Deep Six Salvage partners are searching for a specific sunken Spanish galleon. Wolf has always had a thing for Chrissy, but the woman-in-question wants to remain just friends. When she gets shot, he assigns himself as her caretaker. Wolf plans to use that time to win Chrissy’s love and trust. Can Wolf protect Chrissy against unknown attackers? Will he manage to convince her that he is the settling down kind of man?

Christina “Chrissy” Szarek is a native to the Key West area in Florida. She co-owns a dive shop with her childhood friend. Chrissy refuses to follow in her late mother’s footsteps, so she plans to keep Wolf at arm’s length. However, the irresistible man makes it difficult for Chrissy to stick to her convictions. When unknown assailants target her, she turns to the only man who can protect her. Can Chrissy trust Wolf enough with her heart? Or will he be another bust?

Wolf is such a love! He possesses the right amount of alpha-ness without being too overbearing or conceited. Plus, Wolf has such a fun and wicked sense of humor. He also knows when and where to employ it. I adore Wolf’s selfless sense of responsibility, especially towards his family. He willingly provides financial support for his unmarried sisters and their children. Not too many people would be this generous. What I love the most about Wolf is his penchant for messing up popular song lyrics. He literally is the king of misheard song lyrics.

Chrissy is everything that I enjoy in a heroine. She is equal parts strong and vulnerable. I understand Chrissy’s reluctance to falling in love, especially after witnessing her mother’s many disastrous relationships throughout the years. However, that fear nearly cost her the perfect man right in front of her. What I like the most about Chrissy is her ability to understand when to stand firm and when to concede. She makes it a habit not to rely on others for help. However, when she is wounded, Chrissy does not let pride stand in her way of accepting help from Wolf.

DEEPER THAN THE OCEAN is book four in Julie Ann Walker’s romantic suspense series, THE DEEP SIX. I advise reading the prior three books before jumping into this story, especially RIDE THE TIDE. The author does a wonderful job of setting up the next couple for the following book. I love it when they do this. It gives me something to anticipate!

DEEPER THAN THE OCEAN is an action-packed tale of two people overcoming their insecurities to be together. I cannot wait for Mia and Romeo’s book! It promises to be a great read.