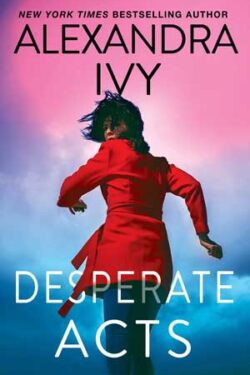 Kaden Vaughn is a former Hollywood stunt driver. He believes the skeletal remains found in Pike, Wisconsin, belong to his brother’s fiancé. Kaden intends to solve the woman’s mysterious disappearance for his deceased brother. However, the authorities’ methods in handling the case seem shady and dubious. Kaden’s only ally is the owner of the local grocery store. Someone does not want them poking their nose into the case and tries to scare them off. Can Kaden protect Lia from the true murderer? What terrible secrets will they dredge up? And at what cost?

Lia Porter runs and operates her family-owned grocery store. When a body is discovered near town, she recalls an incident she had witnessed fifteen years ago. Lia disagrees with the authorities’ conclusion on the case. The only person who shares her suspicions is the ruggedly handsome stranger from Hollywood. She and Kaden start their own investigation, only to learn more than what they bargained for. Someone in Pike wants to keep their secrets hidden, and they are willing to kill to keep them. Will Lia become another unfortunate victim? Will she and Kaden solve the fifteen-year-old case?

Kaden is such a positive inspiration. He came from a rough upbringing with an alcoholic father. Kaden wisely escaped that lifestyle and found his path in life. I admire Kaden’s determination to honor his brother’s memory by solving the case that destroyed him. He may not have liked his brother’s fiancé, but he set aside his differences to investigate her strange disappearance. What I like the most about Kaden is his protectiveness towards Lia. He knows their investigation is dangerous, and he did not want to jeopardize her safety or livelihood.

It took me a while to warm up to Lia. She came off too serious and strait-laced for my tastes. However, my opinion changed as the story progressed. Kaden’s presence allowed Lia to tap into her hidden adventurous side. I understand Lia’s dislike of how others viewed her. She grows tired of being labeled as a dependable, by-the-book killjoy, who refuses to take risks. What I admire the most about Lia is her reasons for keeping her family-owned grocery store open. It is more for the residents than profit.

DESPERATE ACTS is the fourth book in Alexandra Ivy’s romantic suspense series, PIKE, WISCONSIN. This is my first foray into the author’s romantic suspense books. I am more familiar with her paranormal romances. The story can stand alone. The only commonality each book in the series shares is the setting: a small town called Pike in Wisconsin. I like how the story focuses more on Kaden and Lia’s amateurish investigation than their romance. The romance element is there, but it is subtle.

DESPERATE ACTS is a gripping tale of two strangers partnering up to solve a cold case. I plan on checking out the other books in this series. I cannot wait to learn what other dark and dangerous secrets Pike, Wisconsin has.