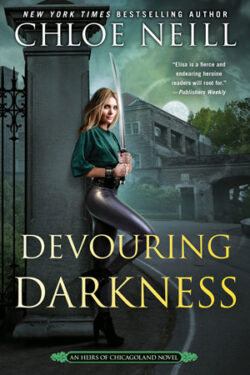 In the fourth book in Chloe Neill’s Heirs of Chicagoland series, born-vampire Elisa Sullivan happens upon an ancient evil during the course of her job, an evil that intends harm to her family and friends. One that might not be able to be stopped.

Elisa is the daughter of the powerful Cadogan House leaders. She works as an ombudsman (think supernatural police) and is dating the heir of the North American Central Pack’s leader. Unfortunately, there’s trouble brewing with her boyfriend’s pack, made worse by the fact he’s dating a vampire.

Something powerful is trying to invade Chicago, and it has demon stink all over it. And even worse, Elisa’s parents and her friends’ parents, while congregating at Cadogan House, have all disappeared…including the house! There’s evil at work, and if Elisa isn’t careful, she might just lose everyone she loves.

This story is best read after the others in this series, so you can fully understand the relationships between Elisa and her friends and family. The author does a fantastic job of showing the world Elisa lives in, as well as the character growth Elisa has displayed since the beginning of the series.

DEVOURING DARKNESS is a fantastic paranormal romance and must-read for fans of the Heirs of Chicagoland series.