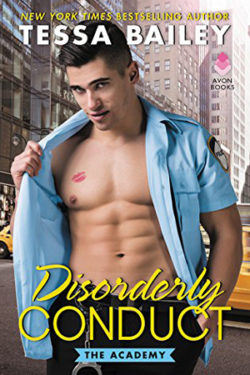 DISORDERLY CONDUCT, the first book in THE ACADEMY SERIES, seemed to get better as I kept reading. Initially it was hard to fathom how Charlie and Ever kept hooking up, and there wasn’t really a story. But as I got more into the book, the story improved and had a nice flow to it. The story was told either from Charlie’s or Ever’s point of view and kept me on my toes.

Charlie is a cadet in the police academy following in his dad, his brother, and other family member’s footsteps. He has to be the best since he has a legacy to uphold.  What happens when he realizes that there’s more to life than giving his entire being to his job?

Ever follows rules of dating set down by her mom until she decides she wants more out of life. She also starts a catering company with her roommate, Nina, that seems to be taking off. The only things Charlie and Ever seem to have in common are that neither wants to be in a relationship and they both like hot sex. Their lack of communication gets them into a lot of trouble, but then Charlie doesn’t communicate with his dad and brother, and Ever doesn’t communicate with her mom, so they seem to be following what they know. When communication becomes all important, look out!

The story is filled with family and friends and centers around their jobs with steamy moments interspersed. Charlie proves himself a good guy many times over, but he’s holding back some crucial information from Ever. If she finds out, things won’t be pretty!  There is nice closure with the epilogue, and I look forward to reading the next book in the series, INDECENT EXPOSURE.

Bailey is a new-to-me author. I plan on adding some of her other books to my always growing TBR pile.