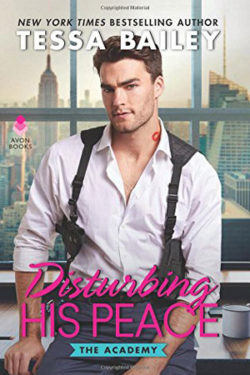 DISTURBING HIS PEACE by Tessa Bailey is the third installment of The Academy series, which follows a group of rookies in the police academy as they battle personal demons while opening themselves up to the possibility of love.

Danika Silver is one of only two women in her police academy class, and she works twice as hard to prove to herself and her colleagues that she deserves to be there. In addition to the academy, she is the go-to person in her family and bends over backwards to help them out of jams and make their lives easier.

One person standing in her way is Lt. Greer Burns, a stoic and tough teacher who is also her roommate’s sexy older brother. When Danika’s attempt to help a family member lands her in hot water, Greer is the only person she can think to call. Now two people who went out of their way to avoid each other are suddenly thrust together and forced to face their feelings for each other head-on.

There is nothing more sweet and sentimental than a man described as big, bad, and tough getting in touch with his own vulnerabilities. The self revelations of the main character are heartbreaking at times but it in no way take away from his masculinity.

Women will be able to relate to Danika and the difficulty she has of asking for help. With her, the author maintains a balancing act of showing readers an independent and capable woman who is smart and secure enough to know when outside help is needed.

The story flowed beautifully and the characters were wonderfully complex and interesting.