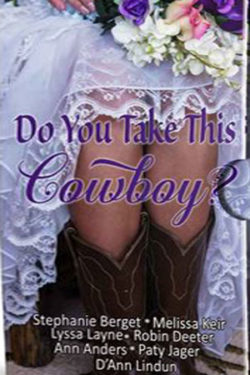 DO YOU TAKE THIS COWBOY? is a box set anthology that has seven stories with cowboys getting married, one by each of the listed authors, some of whose books I’ve read before. I’ve always been partial to Western romances, and this anthology didn’t disappoint. The stories and characters are totally different from each other, but there are cowboys and love, soul mates, and even some second chances at love.

WINNING A COWGIRL’S LOVE is a continuation of CHANGING A COWBOY’S TUNE, which was a story in the COWBOY SIX PACK ANTHOLOGY that I’ve previously read.  WINNING A COWGIRL’S LOVE was a fun read and had me rooting for Randi and Davie. They used to date but had broken up six years before, and there was no love lost between them… or was there? When Randi wins the $50,000 grand prize in the Your Dream Wedding contest, she doesn’t know what to think or do since she doesn’t have a groom or even a boyfriend. When she and Davie agree it’s worth splitting the money to marry and stay married for the six months required, they’re all in. Randi still has a secret from their past to break to him, and that could put an end to everything real fast! From there it’s a laugh a minute with wedding planning, filming, and an annoying host, especially when their feelings for each other rush to the surface. A fast-paced read, WINNING A COWGIRL’S LOVE has characters I’ve met before plus some closure and a happily-ever-after. Stephanie Berget is an author whose stories I’ve enjoyed in other anthologies and I look forward to reading more of them.

CLAIMING A COWBOY’S HEART had a sadness to it given Michelle’s losses and sorrows in life. But it was upbeat too. When Preston comes to town to take over his late grandfather’s small town veterinary business (that he inherited along with his grandfather’s house) it’s all he’s hoping for and more. He’s back where he spent happy summers, away from his parents and New York City. When his and Michelle’s paths cross unexpectedly, there’s a zing of instant connection. Neither wants to acknowledge it, but they both ruminate on the attraction. Michelle lives with her mom and disabled daughter in her childhood home and isn’t looking for love or even a relationship. Preston just wants to get settled and successfully fill his grandfather’s shoes. We get to know the characters, and they each have a depth to them. Of course, in small towns everyone knows everyone else’s business, and it is so true here. I liked how Preston’s grandparents played a role in the story. There’s a nice flow to the plot and good closure thanks to the epilogue that takes place a year after the story ends.

Melissa Keir is an author whose BROKEN VOWS story I’ve previously read in the COWBOY SIX PACK ANTHOLOGY. It too is part of this series. I look forward to reading more of her books.

ROSES WITH THORNS by Lyssa Layne

ROSES WITH THORNS held my interest from the first page to the last. I love the title of the book and its importance to the story. The prologue set the stage of what was to come, and the epilogue gave some closure. The story had a nice flow to it, and we really get to know Robby and Jordan over the years, as well as her friends Mia, Abram, and their dad. Baseball is front and center as is college, the ranch, and even the Army.  There was such emotion throughout the story, but also patience and love shown by Robby, especially as he waited for Jordan to come of age. Watching their love grow over the years and stay real and true was heartwarming. I didn’t like how Abram acted after being injured on his college baseball team, or how his downhill spiral continued after he graduated. I like that the story will continue in UNTIL YOU FALL IN LOVE in the COWBOY, MINE ANTHOLOGY.

Ms. Layne is a new-to-me author, and I will give her other romances a try if this is her caliber of writing.

THE SILVER BELL SHIFTER has shifters in it, which is not normally a book I would read since paranormal romance is not my favorite genre. I was pleasantly surprised by the author’s writing and how she handled all the transitions going on. At first glance, Calvin and Riley should not have an attraction to each other, but they definitely do.  Sparks are always flying when they are together. Is it because they are soul mates, or in their case, shifter mates? The story has a few twists and turns as we are introduced to all of Calvin’s family. There was a nice flow to the story, and Riley was a woman who went after what she wanted until she thought she didn’t want it anymore. I loved the romantic touches and nice closure.

Ms. Deeter is a new-to-me author. I look forward to reading more of her contemporary and western romances, as well as those in this series.

MY FOREVER SUGAR by Ann Anders

MY FOREVER SUGAR gives a new meaning to whirlwind romance. After meeting in St. Thomas at the wedding of friends, Tucker and Isabella spend several idyllic days together and get engaged. She lives in California, but he lives and works on his family ranch in Colorado. You know what that means! When Tucker and Isabella, or Isa as she’s called, meet again at his home, she doesn’t get the warmest welcome from his family or the family friend who hopes for more. There are a few twists and turns and lots of loving. The miscommunication and angst set in ranch life enriched the story and made their coming together sweeter. There is nice closure with the epilogue and a happily ever after.

I look forward to reading more books by Ms. Anders, a new-to-me author. She also writes historical romances under the name Annabelle Anders.

WRONG COWBOY TO LOVE is a continuation of the TUMBLING CREEK RANCH series, and I was happy to be back with characters I’ve met before. Ruby and Dillon have sparks the minute they meet and connect on so many levels, even though they don’t seem to have much in common. She’s a tech whiz who’s always invisible and seems to like it that way, except no one ever sees her or compliments her. He’s a singer/songwriter trying to get his songs out there and always on stage when he has gigs. They’re both all-in, but some think they’re moving too fast. Her family was hard to like and spit venom whenever they spoke. The lands surrounding the ranch and the cabins were breathtaking in the descriptions used. The story had a nice flow and had the closure I look for. It gave me the happily ever after I wanted after a few unexpected twists and turns and with some hard-to-like people!

Ms. Jager has become one of my favorite authors of historical romances set in the west. I’ve read several of her full-length novels as well as several stories that have been part of anthologies with all things cowboy! I look forward to reading more of her books, and I’m hoping there will be more in this series.

HER TAYLOR MADE COWBOY by D’Ann Lindun

HER TAYLOR MADE COWBOY was much better than I anticipated since I had read novellas by this author before and had trouble connecting with the characters. This was an enjoyable read that takes place in Colorado and Montana and has a wedding or two with more to come. Waylon is looking for a new start, especially when he meets ex-model turned photographer, Taylor, at his brother’s wedding. When she’s done doing her job for the evening, things get fast and furious quickly. Is it a one-night stand— something that Taylor doesn’t do, or will there be more? There was a nice flow to the story and a depth to the characters. Pride gets in the couples’ way more than once. I loved the descriptions of the land and all things wedding. The story had romance along with nice closure and several happily-ever-afters. I was glad to see that two more Wainwright brothers will be having stories of their own. There are six brothers altogether, so maybe the others will have a story to tell as well!

I look forward to reading more books in this series and am happy to give more of this author’s books a try!