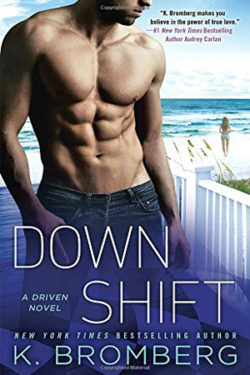 DOWN SHIFT is the next book in the Driven series by the overwhelmingly talented K. Bromberg. This book is all about Zander, who we knew as a child in Colton and Rylee’s love story, but wow did he ever grow up well. Not only did Zander remind me a bit of his role model–the one and only Colton Donavan–but he owned his faults just as much as his achievements, if not more. This book starts with a very gut-wrenching prologue told from Zander’s POV as a young boy. And it leads us to question what we thought we knew of his background and makes us realize we only knew the very tip of the iceberg that is Zander Donavan.

Zander was adopted by Colton and Rylee in order to keep him safe from his drug addicted uncle wanting a paycheck from the state. Regardless of the fact he was the only boy formally adopted from the House (a group home for older kids who didn’t find adoptive parents), he considers all the boys who aged out of the system, as well as Colton and Rylee’s biological child, his brothers, making him one of nine. Having such a large, supportive family was always a comfort to Zander until he received a box full of things belonging to his biological parents. Its contents made him feel like everything he thought he knew was a lie. Seemingly overnight, that large family feels like it’s suffocating him, and Zander begins to wreak havoc trying to shake that feeling.

Needing time and distance, Zander decides to disappear by heading out to PineRidge Island off the coast of Washington to work on his friend Smitty’s house. Zander gets to stay in the house rent-free as long as he likes, but he has to make all the necessary repairs to the rundown cottage. The only problem with this situation is that no one mentioned this to Smitty’s wife, and she too has someone living in the house who is slowly working on repairs.

Getty Caster is also living in the small cottage on PineRidge Island after having called her mother’s long-lost friend, Darcy. Getty is newly divorced and on her own for the first time in as long as she can remember. She works at the local pub and paints beautiful pictures in her free time but remains rather timid when she is in public. Coming home after a late shift at Lazy Dog’s and wanting only to hop into a nice hot shower, Getty finds herself face to face with a gorgeous but equally naked man. Once the initial fright is over they are able to figure out the housing confusion.

Getty and Zander both have many demons they need to conquer but decide to try their hand at friendship, in the hopes of making their living arrangement less awkward. As the old cottage begins to transform, so does their relationship. But Getty knows Zander has a busy life to go back to, and she wants no part of the fast lane lifestyle again.

Every time I read a book by this author it astonishes me how I am drawn in by the characters she creates. The complexity of how she brings them to life is what makes her books stand out from all the rest. While I do admit there was a bit too much time before they actually got together, I did understand her reasoning as to why the build-up was needed. Eight books in to the Driven series and I can safely say I don’t think I will ever get sick of it. Actually, I would love a book on each and every one of the boys from the House!