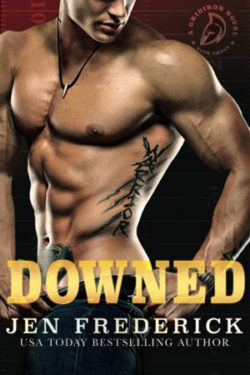 DOWNED is the third book in the Gridiron series, and it is all about the man we love to hate–JR “Ace” Anderson. While this is the third book in the series, it can technically be read as a stand-alone. But the previous book–JOCKBLOCKED–gives a lot of insight into why Ace has such a horrible reputation for arrogance and selfishness to name a few, and it’s a great read.

The setting this time around has changed, as Ace has left the Western State Warriors and will be playing his senior year at Southern U. A new school means new faces, but Ace can’t understand why he gets the cold shoulder from practically everyone. Yet the one person he should stay far away seems to have made it her mission to welcome him.

Bryant Johnson has gone out of her way to rehabilitate the jerks at Southern U and make them into the best boyfriends possible. For the last few years, Bryant has taken the “jerks” under her wing and gone about making them into what all girls dream their boyfriends to be. One look at Ace Anderson and Bryant decides he will be her next project. But there is something different about this guy that gets to her.

Ace Anderson lead WSU to two championships when out of nowhere the head coach decided to replace him with a freshman quarterback. Having no choice, Ace made the move to play his senior year at Southern U with the hopes of leading them to victory. Ace has been at the school through the summer training camps and the season is about to start, but his teammates are still rather chilly. Seemingly out of nowhere a beautiful, curvy blonde approaches him at a bar and they hit it off immediately. Ace soon realizes how much everyone loves the girl he is dating and decides to give it his all since he has nothing better to do.

I loved the character development Frederick used for both the hero and the heroine in DOWNED. Both of them had to come a long way to reach their happily ever after, but the journey was worth it in the end. Whether she is collaborating with another author or writing solo, Jen Frederick is always an author I will read.