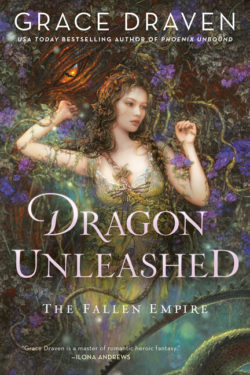 Malachus is a draga trapped in a human guise. He needs to find his mother-bond, so he can finally attain his beast form. Malachus’ search brings him to the Krael Empire and the free trader camp. Halani and her nomadic people offer him care and shelter after he is ambushed. Something about the gray-eyed healer calls to both beast and man. Will Malachus give up the mother-bond to protect Halani? Or will they both perish at the Empire’s hands.

Halani is a free trader woman and her caravan’s healer. She is born with the gift of earth magic, something she must keep secret from the Krael Empire. Halani warns her uncle against buying a strange yet enigmatic artifact. She and her people discover a wounded man near their camp. Halani realizes that Malachus and the artifact are connected. Will Halani aid her uncle by keeping the artifact secret from Malachus? Or will she defy him by giving Malachus the artifact?

Malachus is the perfect fit for Halani. He being a creature born of magic, and she being a woman gifted with earth magic. I adore Malachus’ gallantry. He refuses to allow anyone, especially the privileged, to mistreat women beneath their cast. I like how ruthless Malachus can be. Like the beast within, he does not believe in holding back, especially to those who deserve retribution. What I love most about Malachus is his decision to teach Halani how to read. He knows teaching her will also benefit her people.

I am happy that Halani got her happily ever after. She definitely deserved to find a man who would respect and appreciate everything that she is. I adore Halani’s natural empathy for the dragas in the stories she tells her people. She senses there is more to the tales than what is told. I like how Halani’s view on humanity almost mirror Malachus’. However, she refuses to allow their atrocities keep her from showing kindness and compassion to those who deserve it. What I love the most about Halani is her devotion towards her mentally challenged mother. She never once resented being the parental figure for her mother. Halani always put her mother’s well-being before her own.

DRAGON UNLEASHED is book two in Grace Draven’s fantasy series, FALLEN EMPIRE. The story picks up right where PHEONIX UNBOUND, the first book, leaves off. It is necessary to read the prior book to get a better understanding of the series’ world-building. I am so glad the couple from the first book makes an appearance at the story’s beginning. I also like the author’s take on dragons. She has done a wonderful job tweaking the majestic creatures enough to make them her own.

DRAGON UNLEASHED is a harmonious blend of fantasy and romance. I hope the author plans to give Siora, the Spirit Whisperer, a book. I cannot wait to see what new adventures await in this spellbinding world.