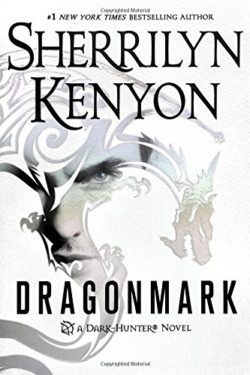 Illarion Kattalakis is a drakomai, an accursed offspring of a demonic mother. Aries, the Greek God of War, entrusts him with a weapon capable of bringing about the world’s destruction. Illarion hates humans and Were-Hunters for their past transgressions against him. Out of boredom, he attends a village festival in incognito and to his surprise, Illarion meets a kindred spirit, a woman who has quite a lot in common with him. Edilyn worms her way into his heart, and there is little Illarion would not do to keep his human mate happy. However, dangerous forces threaten to tear asunder their tentative happiness.

Edilyn is the daughter of a simple archer. She blames all dragons for her father’s death. Edilyn holds no interest in becoming a dragonswan, but she attends her village “Winnowing” only to prove her worthiness of becoming a marchoges, a warrior without a dragon partner. Her thoughtfulness and kindness to a mysterious cloaked stranger changes Edilyn’s future. Illarion not only teaches her the warrior’s way but awakens her heart. Tragedy intervenes when the couple tries rescuing her mother from the evil fey queen, Morgen le Fey.

I have been curious about Illarion since his role in DRAGONBANE. His backstory is heart-wrenching. Illarion’s existence has not been an easy one, so I empathize with his reasons to remaining solitary and aloof. He carries the subconscious scars of his mother and human’s mistreatment as a young dragonet, so I understand Illarion’s trust issues. I like how he unexpectedly finds a fellow kindred spirit in Edilyn. They are wounded souls, wronged by others and cast adrift in the world. I love how Illarion encourages Edilyn’s dreams by teaching her how to fight, and how, in Edilyn’s way, she teaches him how to love and trust another.

Edilyn is such an admirable heroine. Rather than become a dragon’s mate, she works and fights hard to achieve her dream of becoming a marchoges. Although she is often ridiculed, Edilyn never allows the villagers’ scorn to derail her from the path she has chosen. I do admire the clever lengths she undergoes to make certain no dragon chooses her until Illarion. I like how after the initial shock of discovering what Illarion truly is, Edilyn recognizes that they are kindred souls. During their time together, Edilyn proves that not all humans are like the ones who abused him as Illarion does the same with the dragons.

DRAGONMARK is book twenty-seven in Sherrilyn Kenyon’s popular DARK HUNTER series. My only complaints with DRAGONMARK is that Illarion’s role in the story takes a back seat from the middle of the book to the end. The middle area reads as if it belongs better in book twenty-five, SON OF NO ONE, and the rest in book twenty-six, DRAGONBANE. I believe if the author condensed the recapped events and added more of Illarion’s perspective, I would have enjoyed the book more.

DRAGONMARK is the latest installment of Sherrilyn Kenyon’s DARK HUNTER world. As much as I love the author’s DARK HUNTER and LORDS OF AVALON series, I wish she kept the two worlds separated. As much as I adore being reunited with beloved characters, especially my favorites from previous books, I would have liked more scenes involving Illarion and Edilyn’s reuniting and resolution.  Regardless, I anticipate the next book, secretly hoping it will be either Falcyn or Sarraxyn.